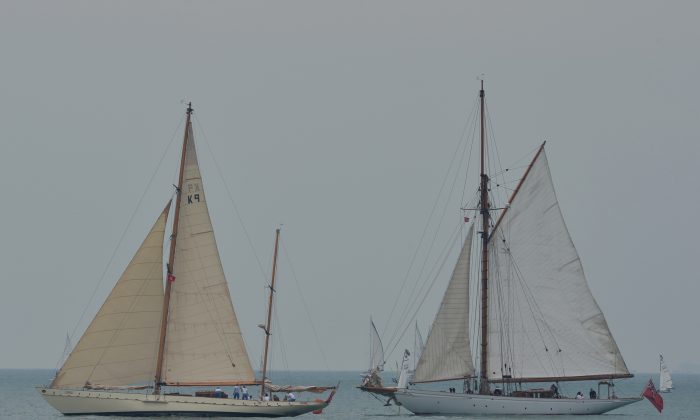 The Classic Yacht Rally organised by the Aberdeen Boat Club (ABC) was held on Saturday and Sunday (May 4-5) comprising one race each day starting at Stanley and Tai Tam at the extreme south-east of Hong Kong Island.

They all set off from Stanley Bay on Saturday afternoon, sailed various courses to suit racing and cruising divisions, and finished up at Tai Tam for a Spanish Fiesta BBQ.

A spokesperson for the organisers described the atmosphere as “relaxed but classy.”

The classic yachts at anchor gave a special feeling to the evening. In the morning, participants enjoyed breakfast on the committee boat, before setting sail again, this time on a course around the islands, finishing near Middle Island.

There were many prizes, including one for the “oldest boat” (that was calculated by adding the age of the yacht together with the average age of the crew), which was definitely a competition between Rona and Merrymaid.

The prize for the most colourful boat was won by Triton, a Hebe Haven boat with an all-ladies crew that takes part every year, this time with wigs that matched their toe nails.

The Farr Side, a Classic Farr 38, won Classic Racing Yachts division with antique crafts Merrymaid, a Camper and Nicholson Graff Cutter built in 1904, and Roma, a Stowe & Sons 78’ built in 1895, second and third, respectively.

In the Non-Classic Racing Yachts division, the top three boats in order of placings were Andiamo, Goodwill and Xiphlas. These were followed by Jarrah, Sirocco and Heart Beat, respectively.

The Classy as well as the Classic Vintage and Antique boats entered the “Concours D’Elegance” rally that included the impressive Lady Lorraine, a 2004 Turkish Gullet 89, and the Carpe Diem, a Catalina 36 Mk II built in 1999.