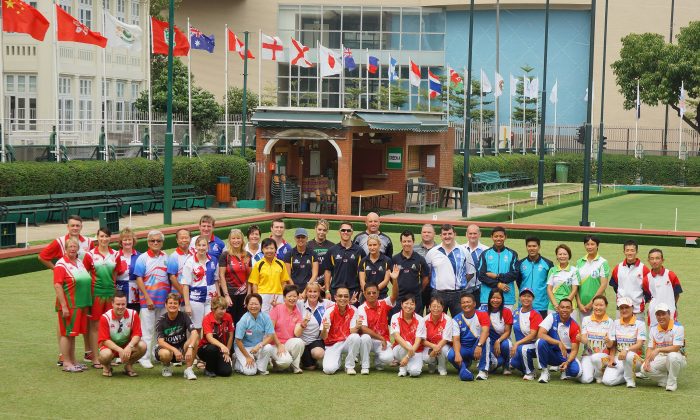 The CCC 120th Anniversary Hong Kong International Bowls Classic will commence with the singles competition this weekend (Nov. 8, 2014). Same as the previous event, top bowlers from 13 of the world’s strongest bowling nation will participate in the annual event. The photo shows participants at the 2013 event. (Mike Worth)
Hong Kong

HONG KONG—International bowlers are arriving in Hong Kong this week to prepare for their challenges to the titles at this year’s Hong Kong International Bowls Classic which starts on Saturday Nov. 8, 2014.

But the bad news for lawn bowls fans is that this year’s competition will not be televised due to a hugely inflated broadcasting fee. In the last two years, all the finals were broadcasted live on NowTV.

The 64 men and 64 women players will take part in the singles competitions.

Last year, Hong Kong bowlers made history by having representatives in all the Quarter Finals however, the only survivor, Hong Kong international Stanley Lai, was defeated by England bowler Richard Catton in the final.

The singles is a knockout competition that will be played at the Hong Kong Football Club, Indian Recreation Club and Craigengower Cricket Club, on Nov. 8-9, with the finals being held at CCC in the afternoon of Nov. 9.

After the conclusion of the singles, the seven-day pairs competition will commence on Monday (Nov. 10), also at the same venues.

The 24 teams of each gender will be divided into two groups to play out a round robin competition. The top team from each group will enter the Semi-finals directly, while the second and third place will meet in a play-off to fight for places in the Semi-finals.

First organised in 1981, the Hong Kong International Bowls Classic is recognised as one of the best outdoor bowls tournaments in the world. Over the years, famous bowlers from all leading bowling countries have participated in the event. Hong Kong has won the pairs title on five occasions, with the last triumph in 2007. In the singles, Hong Kong players George Souza Jnr and Noel Kennedy won their titles in 1984 and 1994 respectively.