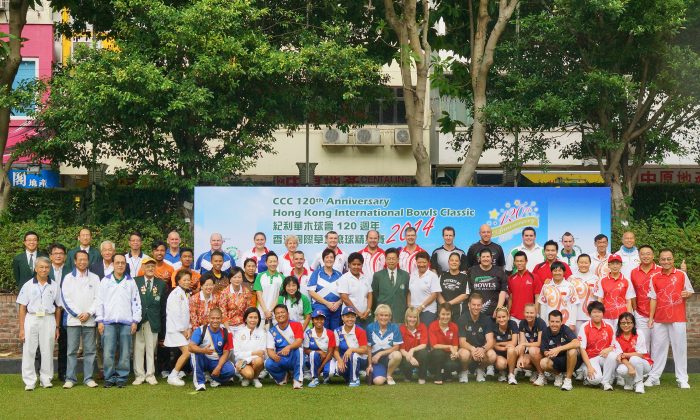 The Hong Kong International Bowls Classic will commence with the singles competition this weekend. Same as the previous event, top bowlers from 12 of the world’s strongest bowling nation will participate in the annual event. The photo shows participants at last year’s event. (Mike Worth)
HK Lawn Bowls

HONG KONG—Bowlers around the world will be able to watch a live broadcast of the finals of the forthcoming Hong Kong International Bowls Classic online this year.

This is a step up from the two live broadcasts on Pay-tv channel Now in 2012 and 2013, when the program could only be viewed within Hong Kong territory.

Vincent Cheung, President of the Hong Kong Lawn Bowls Association announced the broadcast in the general meeting on Monday, Nov 2, “Our engagement with Now TV only covered Hong Kong and since then we received requests from lots of overseas bowlers. The new arrangement allows more people around the globe to watch our matches and definitely help to further promote the sport and Hong Kong to the world.

The link for the online broadcast can be found at the HKLBA website of hklba.org.

Meanwhile, international bowlers are arriving in Hong Kong this week to prepare for their challenges to the titles at this year’s Classic.

The 64 men and 64 women players will begin their journey in the singles competitions at Club de Recreio, Kowloon Bowling Green Club and Kowloon Cricket Club this Saturday, November 7.

Defending champion Robert Grant from Scotland will play at Club de Recreio in the first game of the competition, against Wilson Lau of the Hong Kong Youth Team, while last year’s runners-up Muhammad Hizlee will play at Kowloon Cricket Club against Eric Lam from Filipino Club.

For the ladies, all preliminary rounds will be played at Kowloon Bowling Green Club. Defending champion, former world number one Siti Zalina will start her journey with a match against Fanny Wong of Tseung Kwan O Bowling Club.

The singles is a knockout competition that will be played at the three clubs on November 7-8, with the finals being held at KBGC in the afternoon of November 8.

After the conclusion of the singles, the seven-day pairs competition will commence on Monday (November 9), also at the same venues.

The 24 teams of each gender will be divided into two groups to play out a round robin competition. The top team from each group will enter the Semi-finals directly, while the second and third place teams will meet in a play-off to fight for places in the Semi-finals.

First organised in 1981, the Hong Kong International Bowls Classic is recognised as one of the best outdoor bowls tournaments in the world. Over the years, famous bowlers from all leading bowling countries have participated in the event. Hong Kong has won the pairs title on five occasions, with the last triumph in 2007. In the singles, Hong Kong players George Souza Jnr and Noel Kennedy won titles in 1984 and 1994 respectively.