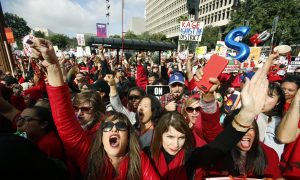 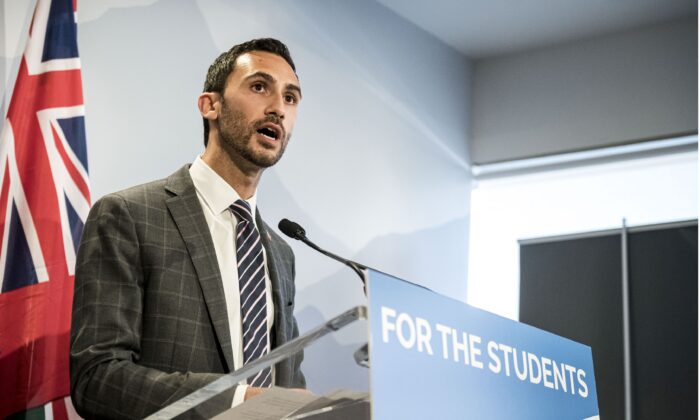 Ontario Minister of Education Stephen Lecce speaks at a press conference in Toronto on Aug. 22, 2019. (THE CANADIAN PRESS/Christopher Katsarov)
Canada

Class Size Is Not the Most Important Thing

If you asked a group of teachers whether they would rather teach a class with 20 students or one with 30 students, most would pick the smaller class. All things being equal, it is easier to teach smaller classes than larger ones.

All things are never equal, however. There are many factors other than class size that impact student learning. And yet class size always seems to get a disproportionate amount of attention, using up more oxygen.

In Ontario, for example, teacher unions have declared war on the Doug Ford government, largely because of the class size issue. Last year, the previous education minister, Lisa Thompson, announced that the government would increase the average high school class from 22 to 28 students. But last week, current education minister Stephen Lecce revised this target down to 25 students.

Both announcements were met with fierce resistance from the teachers’ unions.

It is not surprising that teacher unions advocate for smaller class sizes. Smaller classes mean that school boards need to hire more teachers, which means unions receive higher dues. Obviously, no union would publicly support a reduction in the number of dues-paying members.

On top of this, class size limits are very popular with rank-and-file teachers. That’s because smaller classes mean less marking, more one-on-one time with students, and, especially, fewer report card comments to write. Although none of these things directly correlate with improved student achievement, they do contribute to the overall well-being of teachers, which is obviously an important consideration.

However, the issue is not whether smaller class sizes are popular with teachers and their unions. Instead, the question that needs to be answered is whether the benefits of reducing the average class size outweigh the costs that come with it. On this, the research is clear.

John Hattie, director of the Melbourne Education Research Institute, is one of the top educational researchers in the world. He has analyzed thousands of research studies to determine the factors that have the largest impact on student achievement. He found that capping class size brings a huge cost, but contrary to what the unions often claim, it has only a small benefit.

In the “International Guide to Student Achievement” (2013), Hattie concluded that “there is a voluminous literature that does not support the claim that learning outcomes are markedly enhanced when class sizes are reduced.” He explains that the research studies varied widely in design and methodology, but all agree on one thing—the effects of reducing class size are “quite small.”

In one such study, Drs. Wei Li and Spyros Konstantopoulos used data from 14 European countries to evaluate the impact of various class sizes on 4th-grade students’ mathematics achievement. Their findings were published in 2017 in the peer-reviewed journal “School Effectiveness and School Improvement.” Specifically, Li and Konstantopoulos found that “class-size effects are generally non-significant.”

One thing that is clear is that reducing class sizes is the costliest education reform provincial governments can undertake. Ontario currently has approximately 115,000 full-time teachers. Decreasing the average class size by only 10 percent would cost Ontario taxpayers an additional $11.5 billion a year. This number does not include the cost of constructing additional classrooms or the inevitable administration costs that come with having more teachers.

It makes little sense to spend a huge amount of money on something that has, at best, a modest impact on student achievement. Money that goes to hiring additional teachers cannot go to buying new textbooks, upgrading school facilities, providing professional development to teachers, putting more educational assistants in classrooms, or improving student access to technology. Governments would be wise to invest more resources in lower-cost initiatives that potentially have a much larger impact on student achievement.

For example, the Ontario government has announced its intention to replace discovery math with a back-to-basics math curriculum. This should not be hard to do. Replacing the useless “Math Makes Sense” textbook series with JUMP Math, a program that properly emphasizes the mastery of math facts and the use of standard algorithms, would go a long way to improve the math performances of students. The reality is that a class of 30 students using JUMP Math will almost certainly outperform a class of 15 students that continues to use discovery math textbooks.

Revising the curriculum in other subject areas to have a stronger content knowledge emphasis would also benefit students. Building up the knowledge capacity of students in all subject areas is important for developing reading comprehension, essential for improving critical thinking skills, and a great way to reduce the academic gap between students from rich neighbourhoods and those from poor ones.

The class-size discussion has consumed too much oxygen in the education debate. It’s time for other, more important, issues to finally be addressed.

Michael Zwaagstra is a public high school teacher and author of the newly released book, A Sage on the Stage: Common Sense Reflections on Teaching and Learning.