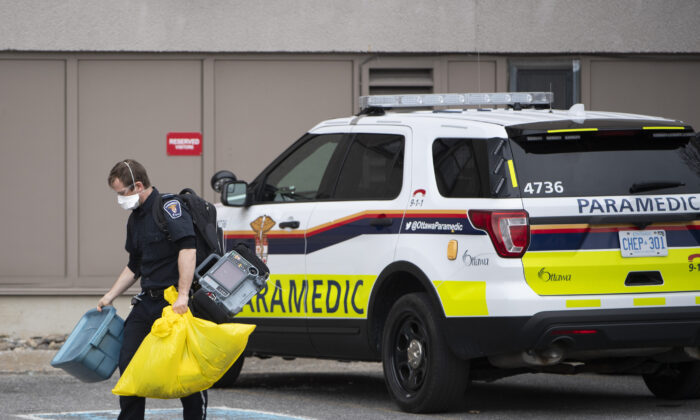 A paramedic walks toward the entrance of a long-term care home experiencing a COVID-19 outbreak in Ottawa on April 26, 2020. (The Canadian Press/Justin Tang)
By Jason Unrau

Combined damages sought by a growing panoply of COVID-19 lawsuits against long-term care homes in Ontario have eclipsed $800 million, after Carlingview Manor in Ottawa was named last week in a class-action lawsuit filed on behalf of residents and their families following the death of some 61 residents there during the pandemic.

“Negligence, breach of fiduciary duty, breach of contract—those are all encompassed in the claim. In terms of other issues, they’re really home-specific. We’re hearing different things about different homes,” said lawyer Stephen Birman.

Birman is representing the $25 million claim against Carlingview’s owner Revera Inc., one of four cases that his firm, Thomson Rogers, has launched against Ontario long-term care homes.

“One of the things we’ve heard from families is the refusal to separate COVID and non-COVID-positive patients, for whatever reason,” Birman says. “Family members observed repeat use of PPE [personal protective equipment] or potential use of contaminated PPE, and then we hear repeatedly with respect to all the homes, both directly and anecdotally, is just the massive staffing shortage during the pandemic period.”

Another COVID-19 lawsuit claims that government pandemic edicts including forced business closures, compulsory face masks, and potentially mandatory vaccines are a breach of individual rights and freedoms protected by the Charter.

The lawsuit was filed in July by Toronto lawyer Rocco Galati for Vaccine Choice Canada, Ontario Civil Liberties Association researcher Denis Rancourt, and six anonymous plaintiffs. Among other demands, the suit seeks “a declaration that the COVID measures taken by both [Prime Minister Justin] Trudeau and [Ontario Premier Doug] Ford, and their respective governments, at the blind and unquestioned dictates of the World Health Organization bureaucrats, constitute a constitutional violation of the abdication of the duty to govern.”

Rancourt has written extensively and critically about the government’s response to the pandemic as an individual and for his association. On April 11, he wrote an article called “Masks Don’t Work,” which was shared widely on social networking site ResearchGate before it was removed.

“It would be a paradox if masks and respirators worked, given what we know about viral respiratory diseases: The main transmission path is long-residence-time aerosol particles (< 2.5 μm), which are too fine to be blocked, and the minimum-infective-dose is smaller than one aerosol particle,” he claims in the article.

Rancourt says accounts cited in the Carlingview case of housing infected and non-infected residents together go against decades of scientific research and applied medicine.

That he has teamed up with vaccine opponents doesn’t faze Rancourt. “I see it as a question of civil rights and freedom to be able to refuse a medical intervention—it’s an absolute civil right of the person to not be invaded medically by the state in any way,” he said.

He also supports the statement of claim itself, which connects the Bill and Melinda Gates Foundation and its interest in a COVID-19 vaccine, World Health Organization pronouncements, and domestic public health edicts, which Tam noted as recently as Aug. 4 could remain in place in lieu of a viable vaccine.

“The statement of claim … put markers down to be able to explore those questions and bring evidence that touches upon those claims,” he said of the strategy.

Aggregated data contained in a recent Canadian Institute for Health Information report notes that 81 percent of all reported COVID-19 deaths in the country as of May 25, 2020, occurred in long-term care homes.

Birman said Thomson Rogers is representing families suing three other Ontario homes individually related to COVID-19 deaths—Altamont, Weston Terrace, and Woodbridge Vista—all owned by Sienna Senior Living Inc. This is on top of separate lawsuits, including one launched by Rochon Genova on behalf of the residents of nearly 100 Ontario care homes, seeking $600 million in damages from the City of Toronto, the Ontario government, and Sienna. There is another lawsuit issued by Diamond and Diamond Lawyers against both Sienna and Revera for $100 million.

Altamont was one of five care homes named in a disturbing Canadian Forces report released May 26. It stated that military personnel assisting at the homes witnessed filthy conditions, including bug and rodent infestations as well as residents calling for help, some left unattended in soiled clothing for hours.

Of all the long-term care homes noted in this story, only Revera and Sienna responded to a request for comment.

“We are aware of the proposed class-actions. We intend to respond in due course through the appropriate court processes,” said Sienna spokesperson Swaraj Mann.

Revera said in a statement: “We are proud of our staff who have worked tirelessly on the frontlines of a global pandemic. We offer our most sincere condolences to the families and friends of the people who were lost to the pandemic.”

Jason Unrau
Jason Unrau was a freelance contributor to The Epoch Times.