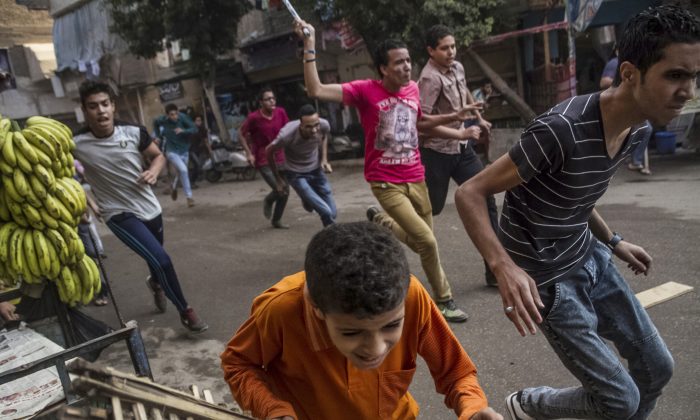 Supporters of the Muslim Brotherhood and bystanders run away from Egyptian security forces during clashes following their protest in the Matariya district of Cairo, Egypt on Tuesday, June 30, 2015. (AP Photo/Belal Darder)
Africa

It was the deadliest violence at Islamist protests in months in the capital, despite a heavy security crackdown on the Brotherhood, which authorities have banned and labelled a terrorist organization.

The violence erupted when over 500 Brotherhood supporters staged a march in the Talibiya neighborhood of Giza, which is part of greater Cairo, after morning prayers following the end of the holy month of Ramadan and the start of the major Muslim holiday, Eid al-Fitr.

Skirmishes broke out between marchers on one side and several local residents and police on the other. The violence quickly escalated with live ammunition and shotguns, said the official, who also said that four people were wounded. The official spoke on condition of anonymity in line with regulations.

A video circulating on social media showed a crowd of young demonstrators in a standoff with police, shooting fireworks in their direction and burning flares before fleeing as explosions are heard. It could not be independently verified but it corresponded to events reported by The Associated Press.

Later, state news agency MENA said that police had taken control of the area, which is located near the main road that leads to the famed Giza pyramids. The agency reported that a total of six people were killed in the violence, including one in the nearby town of Nahia, a Brotherhood stronghold. Police had also arrested 15 Brotherhood supporters, MENA said.

MENA said the man killed in Nahia was a known Brotherhood supporter and demonstrator who had previously been detained by police. The town is fervently anti-government and is considered a no-go zone for security forces.

Political violence has increased in Egypt, two years after Islamist President Mohammed Morsi was ousted by the military, following mass protests against his rule. After Morsi’s ouster, his successor and current President Abdel-Fattah el-Sissi launched a sweeping crackdown on dissent that has killed hundreds and jailed thousands.

Egyptian authorities blame many attacks on Morsi’s Muslim Brotherhood group, which denies using violence. But Brotherhood ranks have become divided recently on whether to use force to confront the government in response to the nearly 2-year-old crackdown against them.

Egypt also faces threats from multiple insurgent factions, including the Islamic State affiliate in the Sinai Peninsula, which the military says killed at least 17 soldiers in a July 1 assault there. Officials from several branches of Egypt’s security forces previously told the AP that that attack killed dozens more.

In late June, Prosecutor General Hisham Barakat was assassinated in Cairo by a car bomb — an attack for which the Islamic State affiliate also claimed responsibility.

Last week, another car bomb ripped into the Italian Consulate in Cairo, destroying a section of the historic building in a powerful blast that was the most significant attack yet on foreign interests in Egypt.