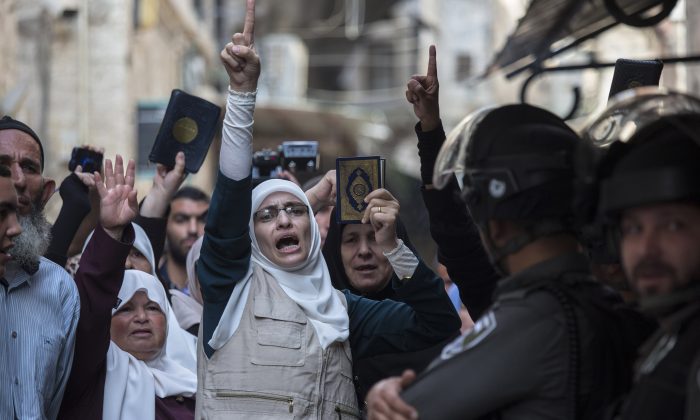 The clashes between Israelis and Palestinians in the Holy Land are not just physical; the two sides cannot agree on what they see, how they got here, who is to blame or where they should go.

To many Israelis, the wave of knifings betrays a hatred of Jews by a Palestinian populace that is easily incited to violence by fanatics dreaming up conspiracy theories about Zionist plots to take over their sacred Jerusalem mosque.

To Palestinians, the violent rage of lone-wolf attackers is an inevitable consequence, a last resort, and just desserts given almost a half-century of Israeli occupation in the West Bank and east Jerusalem, after peace talks collapsed last year and Israelis then re-elected a prime minister who seems wedded to the status quo.

Where Israelis see attackers killed in self-defense against what headlines call the “wave of terrorism,” Palestinians tend to see martyrs sacrificing themselves to fight the unacceptable predicament of their oppressed and humiliated people.

The clashing narratives share a deep-rooted sense of vulnerability.

Israelis are deeply affected by the memory of the Nazi slaughter of 6 million Jews during World War II. The country that emerged from that disaster is surrounded by potential enemies. They look at the map, feel small, and grow peeved at the fuss made about their relatively modest conquest of a few thousand square kilometers, one of many in history.

The Palestinians call Israel’s 1948 “War of Independence” the “naqba,” meaning catastrophe. Some 600,000 of their number left what became the Jewish state, with some expelled and others fleeing. The refugees’ descendants now number in the millions. They are a people who have often felt unwelcome by fellow Arabs, in some cases confined to shantytown “camps,” as in Syria, and denied basic rights, as in Lebanon.

Palestinians tend to ignore that the Arab side rejected the 1947 United Nations partition plan for mandatory Palestine—which the Jews accepted.

Of the Palestinians who did not leave the Holy Land, there are currently four distinct groups, each with their own miseries and grievances:

— About 1.7 million “Arab Israeli” citizens in Israel proper can vote and in theory have equal rights. But they are poorer, disadvantaged and angered by reminders of second-class status like a national anthem that romanticizes Jewish yearning for Zion. Many have assimilated and seem to appreciate the advantages of prosperous and modern Israel, yet some have participated in the knife attacks.

— Some 300,000 Palestinians live in east Jerusalem, which was occupied by Israel in 1967, along with the West Bank and Gaza, but unlike those areas was annexed. They have the right to become citizens, but few have chosen this, fearing it would legitimize Israel’s claim to the city. Instead, most live as “residents” with the right to work and travel freely, but who can under various circumstances find themselves losing their right to remain.

Palestinian neighborhoods in east Jerusalem suffer from a lack of services and schools, along with poor infrastructure, though residents are free to wander from these ramshackle areas to jobs in Jewish west Jerusalem, which Israel is constantly trying to develop and improve.

Israel’s separation barrier has cut many of them off from their hinterland in the West Bank, while those behind the barrier are disconnected from the heart of the city. Palestinians from east Jerusalem have been the driving force of the knife attacks, and as a result, their status has grown even more precarious, with Israel putting up roadblocks that constrict travel in and out of their neighborhoods.

— More than 2 million Palestinians live in the surrounding West Bank, which from 1948 to 1967 was held by Jordan, like east Jerusalem. They live mostly in a maze of autonomous zones surrounded and dominated by the Israeli army. With little control over their travel, they observe helplessly the constant expansion of Jewish settlements in the occupied land between their disconnected areas. The settlers have disproportionate water rights and live under a separate legal system; they enjoy favored funding and can vote as part of Israel’s democracy, while the Palestinians endure strict security measures—without which the settlers might indeed come under constant attack.

Israel cannot decide what to do about this extraordinary situation. Despite occupying and settling the West Bank with Jews for almost 50 years, it has not annexed it for fear of having to officially absorb the millions of Palestinians into its democratic system. While these Palestinians are not at the center of the current wave, in some cases they have protested and attacked soldiers and settlers. Palestinian President Mahmoud Abbas, while being careful not to condemn the stabbings for fear of appearing too close to Israel, has nonetheless instructed his security forces behind the scenes to try to calm the situation.

— Another 2 million Palestinians live in Gaza, an enclave that between 1948 and 1967 was held by Egypt. The area is squeezed between Israel and Egypt and ruled by the Islamic militant group Hamas as a theocratic police state where women are subjugated, dissent is punished, and alcohol is banned. They are cut off from Israel but feel occupied nonetheless because they are fenced in—even by Egypt to the south—and Israel controls the skies and seas. Several have been killed and injured lately in protests at the border.

Sporadic peace talks over the past two decades have failed to progress beyond the autonomy arrangements of the 1990s. The tangle is too tight and the sides cannot agree on the terms of divorce—or even on what happened in the talks.

Israelis feel that past leaders who in vain offered the Palestinians a state in Gaza and almost all the West Bank with a foothold in Jerusalem—in 2001 and 2008—were acting in good faith and exposed Palestinian intransigence. The Palestinians say they have already compromised by giving up their longstanding claim to land that now makes up Israel, and they are in no mood for accepting less than all the land occupied in 1967. They also have a host of explanations for what many around the world see as missed opportunities that may not come again. Some say Israeli offers were not as serious as leaders have claimed, as proved by continued settlement-building.

The world community mostly considers Israel to be in violation of accepted norms by changing the status quo in occupied territories through these settlements, and the disproportionate death toll among Palestinians in bouts of violence also draws fire. But despite the global hectoring, Israel has not been truly punished: it has a mighty alliance with the U.S., favored trading status with Europe, growing relations with Asia and a per capita gross domestic product to rival Britain’s.

In this situation, many Israelis prefer to ignore the Palestinians, most of whom are beyond fences in areas Israelis rarely visit.

Many believe the Arab world is not ready for democracy—the failures of the Arab Spring hardly negate such a thesis—and the Palestinians should be happy with their lot compared with the brutal dictatorships and murderous chaos that have typified other corners of the Middle East, past and present.

Israelis also feel that the Palestinians are being incited—whether by Gaza preachers shouting at the masses to “stab, stab, stab,” or by politicians claiming, with meager basis if any, that the desires of Israeli fanatics to destroy the Al-Aqsa Mosque in Jerusalem or alter the status quo there are secretly the official Israeli policy as well. Palestinians tend to dismiss these things as secondary to a justifiable anger that is consuming their hopeless youth, who undeniably have also gotten worked up through inflammatory videos making their way around Facebook.

On both sides there is a minority that watches the violence in despair—arguably more so in Israel, with its more individualistic society and culture of debate and introspection. To these more liberal Israelis, the apparently perpetual occupation of the Palestinians is a moral stain that also, by tying Israel inexorably to a Palestinian population equal to its 6 million Jews, contains the seeds of self-inflicted ruination.