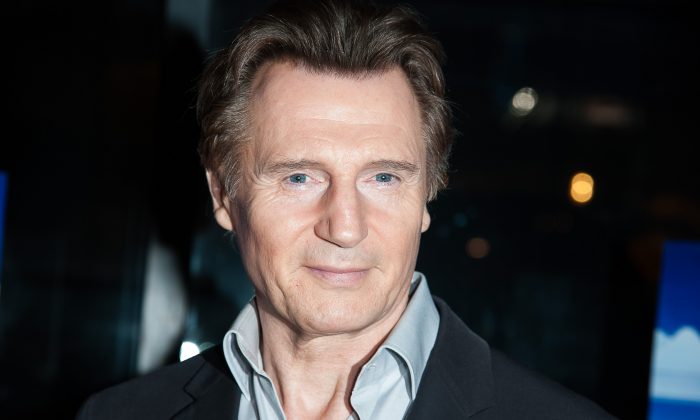 The Super Bowl 49 commercials were characteristically dark this time around (looking at you, Nationwide), and the Clash of Clans ad provided a needed spark of humor.

Neeson is seen elaborately cursing at his phone while he waits for his coffee shop order. It’s finally revealed that he’s having difficulty playing he popular game.

NEW YORK (AP) — The Super Bowl ad games have so far delivered a nod to the Brady Bunch, voiceovers from Muhammad Ali and John F. Kennedy and Mindy Kaling trying to steal a kiss from fellow actor Matt Damon.

Skittles, a first-timer to the big game, got some extra publicity early on when Marshawn Lynch popped some of his favorite candies into his mouth on the sideline. And Chevrolet grabbed some attention with a fake-out before the game even started.

Here’s a look at the ads so far. Check back throughout the night for updates.

Procter & Gamble’s Always feminine products brand is among the advertisers taking a more serious tone this year by addressing social or family issues.

The company’s 60-second ad featured young girls upending the idea of what it means to do things “like a girl.” It’s a version of a previous video that had gone viral.

By aligning themselves with feel-good causes, companies are playing it safe while hoping to engender goodwill from consumers.

NATIONWIDE IS FUNNY, THEN CREEPY

First, Nationwide made viewers smile with an ad featuring Mindy Kaling trying to kiss Matt Damon while thinking she was invisible. Then, the company got a lot more serious.

Another ad by the insurer showed a young boy riding a school bus and lamenting that he’ll never learn to fly, or travel the world with his best friend, or even grow up, because he died in an accident. The ad was aimed at stopping preventable childhood accidents.

“At Nationwide, we believe in protecting what matters most, your kids. Together we can make safe happen,” a voiceover said.

Is Weight Watchers trying to make Super Bowl fans put down the guacamole and chicken wings?

The company says it wants to help people lose weight, but for some viewers, the ad may have just triggered cravings for more junk food.

Nissan returned to the Super Bowl after 18 years with an ad featuring the story line of an up-and-coming race driver and his wife struggling to balance work and raising their son.

In a jarring detail, the ad was set to “Cats in the Cradle” by Harry Chapin, who was killed in a car crash.

Coca-Cola says it’s standing for happiness in the face of Internet trolls.

The 60-second ad was a modern-day twist on Coke’s long-running strategy of getting people to associate its soft drinks with happiness.

In addition to the “Make It Happy” TV ad, Coca-Cola has been releasing online clips featuring testimonials from those who say they’ve been the victims of online negativity, including football player Michael Sam.

Coca-Cola and other big brands have also been targets for online negativity; health advocates frequently criticize Coke for its marketing of sugary drinks.

Toyota’s first spot featured Paralympic medalist Amy Purdy snowboarding and dancing, set to a speech by Muhammad Ali that ends with: “I’ll show you how great I am.”

A little while later, Carnival cruises aired its first Super Bowl ad, which featured an audio clip of John F. Kennedy expressing his love of the sea.

Budweiser’s “Lost Puppy” ad was a winner before it even aired during the Super Bowl. The ad, which shows a puppy running away to find his Clydesdale buddies, already had 18 million views on YouTube ahead of the game.

It’s a tried-and-true formula. Last year, Budweiser broke records with its Super Bowl spot, “Puppy Love,” which was a Top 10 branded content video and Top 10 video overall on YouTube. Some fun facts about this year’s spot:

—Eight puppies are featured in the ad, all of which were just a few months old at the time of filming

—Seven Budweiser Clydesdales underwent training for three months to fine-tune their skills for the ad.

Snickers scores some laughs early in the first quarter with an ad that used clips from the Brady Bunch.

Actor Danny Trejo plays an agitated Marcia Brady with a broken nose, continuing the Snickers theme that people aren’t themselves when they’re hungry.

“This isn’t about you Jan,” says Florence Henderson, the actress who played Carole Brady. This prompts Buscemi to run away while shouting: “It never is!”

The former “Today” show hosts poked fun at themselves in an ad for BMW’s new all-electric car. The ad features a clip from 1994 when Couric and Gumbel express puzzlement over the concept of the Internet and the “at” symbol in email addresses.

Fast-forward to present day, and they’re expressing similar confusion about BMW’s i3 car. Toward the end of the commercial, Gumbel asks Couric if she can twerk.

For those who aren’t familiar with the term, Urban Dictionary defines it as “the rhythmic gyrating of the lower fleshy extremities in a lascivious manner with the intent to elicit sexual arousal.”

Two ads immediately preceding the game grabbed viewers’ attention. Chevrolet’s ad “Blackout” appeared to be a live game feed that turned into static and a blank screen. But Chevrolet used the trick to show that its Colorado truck has 4G LTE Wi Fi, so you could stream the game live in the truck.

Then an Esurance ad showed celebrity Lindsay Lohan trying to pick up a boy from school. When he protests that she’s not his mother she says she’s “sorta” his mom because they’re the same age range and have seen a lot of miles.

“When it comes to the big things (like your mom or your car insurance) sorta just doesn’t cut it,” a voiceover states.

There will be 15 newcomers to advertising’s biggest stage on this year, including Loctite glue and website host Wix.com. That’s the highest number of newbies since 2000.

Advertising experts say the interest from first-time advertisers is a sign companies are feeling good about the most recent economic recovery.

Still, Super Bowl ads are a big gamble for small companies. Some succeed in becoming a household name; Godaddy.com established itself with a racy Super Bowl spot 11 years ago. But others misfire; Groupon’s first and only Super Bowl effort in 2011 aimed to be a tongue-in-cheek take on public service announcements, but was criticized for being insensitive

Taking a page from Coca-Cola, McDonald’s recently launched an ad campaign seeking to tie its brand with the uplifting emotion of loving.

For its Super Bowl ad, the fast-food chain featured a promotion that lets randomly selected customers pay for their orders with small acts of love, like a high-five or a call to a relative. The promotion starts Monday and runs through Feb. 14