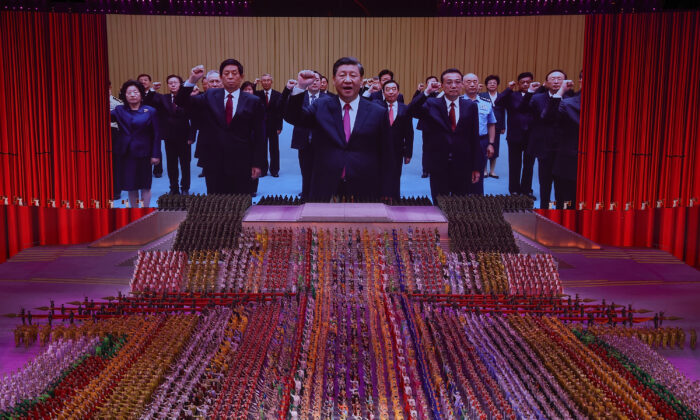 Chinese state-run media forgot a few things in their back-slapping about China’s accomplishments in 2021.

Chinese communist propaganda organs (state-run media) never sleep. The agitprop follows consistent contrived narratives and is relentless—with never a bad word about the Chinese Communist Party’s (CCP) failures or CCP-induced problems. Everything is focused on furthering the CCP’s political goals and objectives, both domestically and internationally. The propaganda is part of the ongoing political and psychological warfare campaign that’s being waged against all perceived enemies of the Chinese state.

This campaign is a key aspect of the coordinated soft power that the CCP projects through the leadership (Xi Jinping), the diplomatic corps, United Front Work Department apparatchiks, controlled foreign diplomats and media (and many others), and of course Chinese state-run media.

Soft power is the concept of shaping opinion and influencing and persuading others to one’s own point of view without resorting to kinetic means of persuasion (for example, war). This is perfectly aligned with Sun Tzu’s strategy of “winning without war,” which has was adopted by the CCP after they “consolidated” control of China in 1949 at the barrel of the gun.

The year-ending back-slapping about the CCP’s supposed accomplishments is a particularly risible example of its political and psychological warfare. State-run media Xinhua trumpeted China’s “momentous milestones” reached in 2021:

As usual, the platitudes propagated by Xinhua (and the rest of state-run Chinese media) obfuscate the truth and ignore other inconvenient facts.

Let’s examine what accomplishments they somehow “forgot” to mention in the context of the above claims.

Item #1 above neglected to mention the concurrent milestone of an average of 1 million deaths per year amortized over the 100 years of the CCP’s existence. This includes deaths during the Chinese Civil War (over 2 million during the 1945-1949 phase alone), the Great Leap Forward (at least 45 million), and the Great Proletarian Cultural Revolution (ranging between 1 million and 20 million). And untold deaths in “re-education” and concentration camps, individual executions, forced relocations, mass starvation via CCP-induced famines, persecution of religious and ethnic minorities, including Tibetans, Uyghurs, Falun Gong, and others.

It’s important to note that these numbers are merely estimates from various sources and the death toll could be much higher. Sadly, we may never know the actual figures as many cases are underreported or undocumented.

Item #2 neglected to mention existing forced labor camps in China’s far-western Xinjiang region brought about by the ongoing genocide and forced “re-education” of Muslim Uyghurs—in reality, the eradication of the Uyghur people as a separate minority group, as well as their entire culture.

Are the wages of the Uyghurs in those forced labor camps included in the CCP’s tabulation of average Chinese wages and claims that “poverty has been eradicated”?

Were the wages of other oppressed and persecuted ethnic and religious minorities included in the computations?

Can the numbers reported by China’s National Bureau of Statistics be trusted?

The Common Will of the People

Item #3 claims that the “common will of all ethnic groups” is represented in Xi’s whitewash historical resolution. As I discussed in previous articles (here and here), the “will of the people” amounts to whatever the CCP says it is, as there’s no true representative democracy in China.

The “whole-process people’s democracy,” as espoused by Xi, is nothing but another standard meaningless Marxist euphemism. The CCP certainly does not govern with the consent of the Chinese people—and never has!

Does anybody really believe that the Uyghurs, Tibetans, Falun Gong, and other persecuted ethnic minority and religious groups were consulted on and willingly agreed to Xi’s historical resolution?

Leading the World in Economic Development

This is quite a bold claim in item #4, as more people are growing skeptical about the CCP’s self-reported economic and financial statistics—even before the real estate giant Evergrande defaulted on its debts. Evergrande’s fall masks a much greater Chinese economic vulnerability brought about by an artificial and unsustainable real estate spending spree.

Does the claim take into account the serious financial difficulties of local Chinese governments? According to Chinascope, local government debt has reached “US$ 4.65 trillion), [with only] Shanghai, Guangdong, Beijing, Zhejiang, and Jiangsu hav[ing] a debt-over-GDP ratio below the red line of 100 percent.”

Does the claim include the 20-30 percent pay cuts that are being administered to civil servants in various provinces and cities?

It should be noted that virtually all of China’s economic growth over the last 40-plus years is due to billions of dollars of foreign direct investment by U.S. firms and other foreign-owned companies and banks, not through indigenous Chinese market-based growth.

Leading the World in COVID-19 Prevention and Control

How can Beijing claim to lead the world when it has yet to disclose the genetic and scientific medical data associated with the SARS-CoV-2 virus to the rest of the world’s medical and scientific research community?

Does anybody really believe that China has not lost a single person to COVID-19 since May 2020 (the death number of 4,636 has been frozen on the coronavirus statistics aggregation web site Worldometer since then)?

China’s authoritarian prevention and control myth was previously debunked in this analysis as nothing more than another front in the CCP’s political and psychological warfare campaign against the rest of the world—and especially the United States.

It would appear that the CCP’s pandemic control measures have not worked in containing the virus in China, as the city of Xi’an (home to 6.5 million people) is in the throes of yet another authoritarian lockdown campaign.

But maybe Beijing is obliquely referring to its political control of the World Health Organization and, thus, the narrative? Good propaganda always contains a grain of truth!

China produces and distributes two COVID-19 vaccines: Sinovac and Sinopharm. According to the WHO, Brazil reported that the Sinovac vaccine was “49.6% against symptomatic infection” after the first dose and “50.7% two weeks after the second dose.”

According to Reuters, “Sinopharm was 50.4% effective in preventing infections in health workers in Peru when it was seeing a surge in cases fuelled by virus variants.”

To be completely fair, there have been recent reports that a “new recombinant protein-based vaccine from Sinopharm is highly effective.” But even if this is true, that version won’t be delivered until some time this year and, thus, is not included in the 2.2 billion doses.

Lastly, as with everything China “gives away,” there are strings attached. In the case of “free vaccines,” those strings are frequently associated with pressure on the receiving countries to cut ties with Taiwan, as noted by various media outlets last year.

Ready for the Olympics

Item #6 is the big egg roll for Xi and the CCP in February 2022. The XXIV Olympic Winter Games is intended to be a big propaganda victory that showcases Chinese world leadership.

Xinhua conveniently neglected to mention the diplomatic boycotts of the Games in China by at least six nations (so far) in protest of the ongoing genocide and forced labor camps in Xinjiang.

There are other “accomplishments” to add to the Chinese regime’s dishonor roll in 2021, including the following:

The CCP’s propaganda about its accomplishments in 2021 obfuscates the reality, neglects its belligerent and aggressive actions around the world, and hides serious internal economic, demographic, and geopolitical problems. Look no further than the ongoing Uyghur genocide and the intimidation of India, Taiwan, and other countries in South and East Asia to discern the truth about China’s “accomplishments” in 2021.

The CCP’s ongoing political and psychological warfare campaign must be continually exposed in order to effectively counter the propaganda claims and preserve true democracy and individual freedoms around the world.