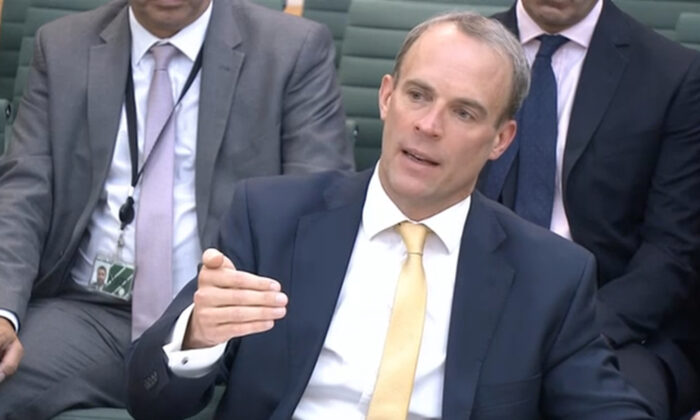 The British Foreign Office has denied that an internal document, which painted a bleak picture of the situation in Afghanistan just weeks before the fall of Kabul, was at odds with its official position or intelligence-based assessments.

Reports which suggest that the document warned of a faster-than-anticipated fall of Afghanistan to the Taliban are “wrong and misleading,” according to the Foreign Office.

Before the rapid unravelling of Afghanistan government control in mid-August, the primary assessment of the UK Government was that Kabul was unlikely to fall in 2021, Foreign Secretary Dominic Raab said on Wednesday during a grilling by the Foreign Affairs Select Committee.

However, committee chairman Tom Tughendhat brandished a copy of what is known as the Principal Risk Register, published on July 22, which he said suggested the collapse could happen more rapidly.

That document—which is not publicly available since it is classified as “sensitive information”—was also obtained by media outlets.

According to the Guardian, the document said, “Peace talks are stalled and U.S. Nato withdrawal is resulting in rapid Taliban advances. This could lead to: fall of cities, collapse of security forces, Taliban return to power, mass displacement, and significant humanitarian need. The embassy may need to close if security deteriorates.”

But the Foreign Office (FCDO) said that the purpose of the document has not been understood and the information misrepresented.

“The principal risk register is a standard monthly report for the management board which does not contain intelligence assessments,” an FCDO spokesperson told The Epoch Times via email.  “It is an internal document which sets out potential risks to the organisation for planning purposes including around duty of care to staff.”

The spokesperson added, “It is simply wrong and misleading to suggest this document is in any way at odds with our detailed assessments of the situation in Afghanistan or our public position throughout the crisis. The July document makes clear that our central planning assumption at the time was that the peace process in Afghanistan would run for up to a further six months.”

Raab told the committee the central assessment of the UK Government was that Kabul was “unlikely” to fall in 2021.

He told MPs: “The central assessment that we were operating to, and it was certainly backed up by the JIC (Joint Intelligence Committee) and the military, is that the most likely, the central proposition, was that given the troop withdrawal by the end of August, you’d see a steady deterioration from that point and it was unlikely Kabul would fall this year.”

Raab said contingency planning and testing of such an assessment took place, adding: “That was something widely shared by Nato allies.”