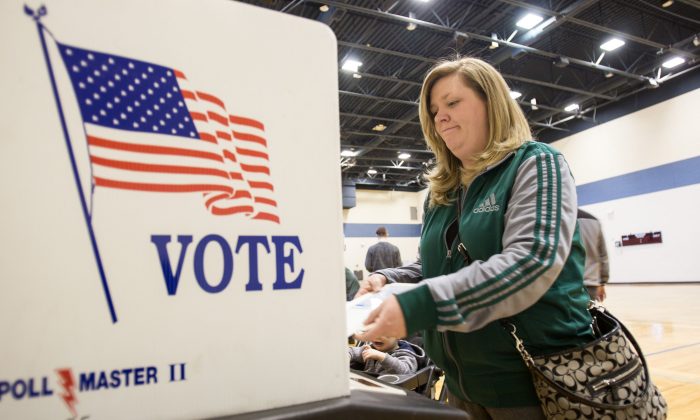 A woman casts her ballot for the Michigan presidential primary at a polling station in Warren, Mich., on March 8, 2016. (GEOFF ROBINS/AFP/Getty Images)
2016 race

Claims of voter fraud have emerged in South Florida’s Broward County this week.

The allegations echo similar ones made during the 2000 election that saw George W. Bush take he presidency over Al Gore by just over 500 votes. Bush was able to declare victory 36 days after Election Day—after much legal hurdling that went to the U.S. Supreme Court.

The Florida GOP had been preparing a lawsuit against alleged voter fraud. However, Republican Party of Florida chair Blaise Ingoglia said officials offered a swift response, saying there’s no need for a suit earlier this week.

“I am pleased that Broward County has quickly agreed to take corrective actions in response to the concerns raised in our letter,” Ingoglia said in a statement. “Florida’s voters must have confidence that the election process is fair, open, and transparent. The Republican Party of Florida will continue to monitor the canvassing process to ensure there are no further violations of the law.”

But on Friday, a notarized affidavit from a sworn volunteer was filed to the Broward County State Attorney’s Office, according to the Independent Journal Review. She alleges that she saw “four Supervisor of Elections (SOE) employees filling out piles of blank absentee ballots.”

Sources with the Broward County State Attorney’s Office told IJR that the office received the affidavit and is being reviewed by investigators.

Broward County, which includes Fort Lauderdale, has about 600,000 registered Democrats