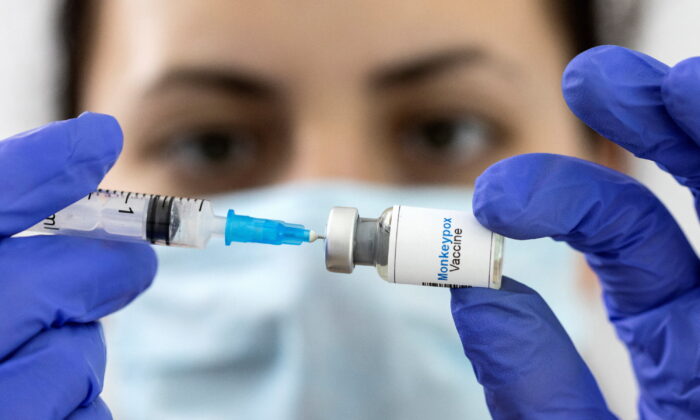 A woman holds a mock-up vial labeled "Monkeypox vaccine" and medical syringe in this illustration taken on May 25, 2022. (Dado Ruvic/Illustration/Reuters)
US News

Claims CDC Classified Monkeypox as ‘Airborne’ and a Form of Herpes Are False: Officials

Posts shared on Facebook that claim the U.S. Centers for Disease Control and Prevention (CDC) classified monkeypox as an airborne virus, it can cause paralysis, and can last months are false, officials said.

Facebook posts containing the claims reviewed by The Epoch Times show they both have a BBC News logo and credit the World Health Organization and CDC. One of the posts says, “CDC has now classified this disease as airborne and anyone within 15 feet can catch it,” while it adds that it is now being classified as a form of herpes, the illness can last up to four months, and it can lead to paralyzation.

Under the Facebook post, some said the information is fake and one said that it’s “trying to scare us to take more vaccine shots.” The person added, “Only way it can spread is through contact from someone who has it, kissing, sex, cuddling.”

The CDC, WHO, and other health organizations have not classified monkeypox as “airborne,” and they have said it spreads via close, prolonged contact from one person to another person. Homosexual males are the primary spreaders of the virus, officials say.

CDC spokesperson Kate Fowlie told AP that the virus “is not known to linger in the air and is not transmitted during short periods of shared airspace.” She added, “In the current monkeypox outbreak, we know that those with the disease generally describe close, sustained physical contact with other people who are infected with the virus.”

Transmission is primarily through skin-to-skin contact, and “direct contact with monkeypox rash, scabs, or body fluids from a person with monkeypox,” according to the CDC website.

“Touching objects, fabrics (clothing, bedding, or towels), and surfaces that have been used by someone” infected with monkeypox can also transmit the virus, the agency says.

Paralysis is not generally associated with monkeypox, according to health agencies, and the virus doesn’t last for four months, but rather between two and four weeks, officials say.

Symptoms of the virus include fever, swollen lymph nodes, malaise, and a rash or lesions that may initially be mistaken for chickenpox or a sexually transmitted disease.

As for the claim about it being a form of herpes, monkeypox is classified as a pox virus in the poxviridae family related to smallpox, cowpox, and others. Herpes, meanwhile, is within the herpesviridae family.