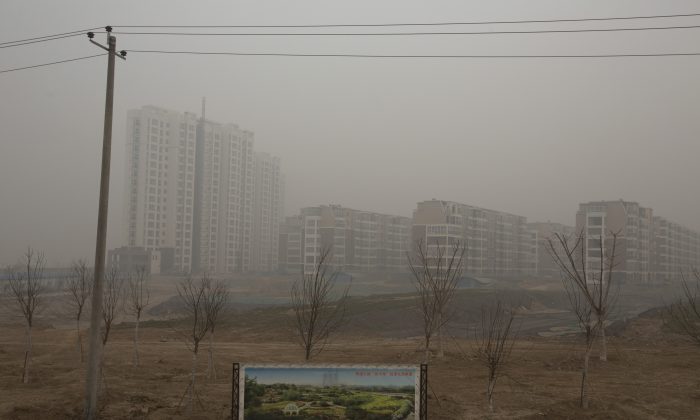 In this photo taken Wednesday, Feb. 26, 2014, an artistic rendering functioning as an advertisement of a residential real estate project is displayed on a severely polluted day in Shijiazhuang, in northern China's Hebei province. Combatting pollution has shot up the agenda of the ruling Communist Party, which for years pushed for rapid economic development with little concern about the environmental impact. Under public pressure to reduce the air pollution that blankets Beijing and cities across China, the country's leaders are rebalancing their priorities. (AP Photo/Alexander F. Yuan)
Science

‘Civilization Will End’ Study Carried Out by NASA; Looks Grim for Industrial Society

A NASA-funded study said there is a possibility for “irreversible collapse” in the coming decades due to increasing resource exploitation and unequal wealth distribution.

“The fall of the Roman Empire, and the equally (if not more) advanced Han, Mauryan, and Gupta Empires, as well as so many advanced Mesopotamian Empires, are all testimony to the fact that advanced, sophisticated, complex, and creative civilizations can be both fragile and impermanent,” researchers at NASA’s Goddard Space Flight Center wrote this week, according to The Guardian.

The report was written by Safa Motesharrei, an applied mathematician with the National Socio-Environmental Synthesis Center, and it says that modern civilization won’t last.

Civilization collapses over the past 5,000 years had to do with “the stretching of resources due to the strain placed on the ecological carrying capacity” as well as “the economic stratification of society into Elites [rich] and Masses (or “Commoners”) [poor].”

Motesharrei and his colleagues conclude that after modeling different scenarios using conditions “closely reflecting the reality of the world today… we find that collapse is difficult to avoid.”

Civilization, he writes, “appears to be on a sustainable path for quite a long time, but even using an optimal depletion rate and starting with a very small number of Elites, the Elites eventually consume too much, resulting in a famine among Commoners that eventually causes the collapse of society. It is important to note that this Type-L collapse is due to an inequality-induced famine that causes a loss of workers, rather than a collapse of Nature.”