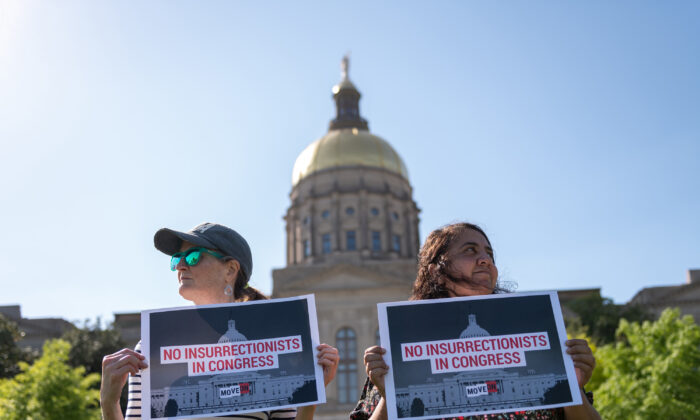 Georgians hold signs in front of the Georgia State Capitol in support of the challenge to Marjorie Taylor Greene’s qualification for the ballot under the insurrection clause of the 14th Amendment, in Atlanta, on April 21, 2022. (Derek White/Getty Images for MoveOn)
Viewpoints

As President Joe Biden’s polls stagnate and the midterms approach, we are now serially treated to yet another progressive melodrama about the dangers of a supposed impending radical right-wing violent takeover.

This time the alleged threat is a Neanderthal desire for a “civil war.”

The FBI raid on former President Donald Trump’s Florida home, the dubious rationale for such a historic swoop, and the popular pushback at the FBI and Department of Justice from roughly half the country have further fueled these giddy “civil war” conjectures.

Recently, “presidential historian” Michael Beschloss speculated about the parameters of such an envisioned civil war.

Beschloss is an ironic source. Just days earlier, he had tweeted references to the executions of Julius and Ethel Rosenberg, who passed U.S. nuclear secrets to the Soviet Union in the 1950s, in connection with the FBI raid on Mar-a-Lago.

That was a lunatic insinuation that Trump might justly suffer the same lethal fate due to his supposed mishandling of “nuclear secrets.” Unhinged former CIA Director Michael Hayden picked up on Beschloss death-penalty prompt, adding that it “sounds about right.”

Hayden had gained recent notoriety for comparing Trump’s continuance of the Obama administration’s border detention facilities to Hitler’s death camps. And he had assured the public that Hunter Biden’s lost and incriminating laptop was likely “Russian disinformation.”

So, like the earlier “Russian collusion” hoax and the Jan. 6, 2021, “insurrection,” the supposed right-wing inspired civil war is the latest shrill warning from the left about how “democracy dies in darkness” and the impending end of progressive control of Congress in a few months.

On cue, Hollywood now joins the civil war bandwagon. It has issued a few bad, grade-C movies. They focus on deranged white “insurrectionists” who seek to take over the United States in hopes of driving out or killing off various “marginalized” peoples.

Pentagon grandees promise to learn about “white rage” in the military and to root it out. But never do they offer any hard data to suggest white males express any greater degree of racial or ethnic chauvinism than any other demographic.

When we do hear of an insurrectionary plan—to kidnap the Michigan governor—we discover a concocted mess. Twelve FBI informants outnumbered the supposed four “conspirators.” And two of them were acquitted by a jury and the other two so far found not guilty due to a mistrial.

The buffoonish Jan. 6, 2021, riot at the Capitol is often cited as proof of the insurrectionary right-wing movement. But the one-day riotous embarrassment never turned up any armed revolutionaries or plots to overthrow the government.

What it did do was give the left an excuse to weaponize the nation’s capital with barbed wire and thousands of federal troops, in the greatest militarization of Washington since the Civil War.

In contrast, Antifa and Black Lives Matter rioters were no one-day buffoons. They systematically organized a series of destructive and deadly riots across the country for more than four months in the summer of 2020. The lethal toll of their work was more than 35 dead, $2 billion in property losses, and hundreds of police officers injured.

Such violent protestors torched the iconic St. John’s Episcopal Church and attempted to fight their way into the White House grounds. Their violent agenda prompted the Secret Service to evacuate the president of the United States to a secure bunker.

The New York Times gleefully applauded the rioting near the White House grounds with the snarky headline “Trump Shrinks Back.”

As far as secession talk, it mostly now comes from the left, not the right. Indeed, a parlor game has sprung up among elites in venues such as The Nation and The New Republic imagining secession from the United States. Blue-staters brag secession would free them from the burden of the red-state conservative population.

Over the past five years, it was the left who talked openly of tearing apart the American system of governance—from packing the Supreme Court and junking the Electoral College to ending the ancient filibuster and nullifying immigration law.

Ball bragged how they had systematically poured hundreds of millions of dark money into changing voting laws and absorbing the role of government registrars in key precincts.

What was revolutionary were new progressive precedents of impeaching a president twice, trying him as a private citizen, barring minority congressional representatives from House committee memberships, and tearing up the State of the Union address on national television.

In contrast, decrying the weaponization of a once-professional FBI and the scandals among its wayward Washington hierarchy isn’t insurrectionary. Nor is being appalled at the FBI raiding a former president’s and possible presidential candidate’s home, when historically disputes over presidential papers were the business of lawyers, not armed agents.

Historic overreach is insurrectionary, not objecting to it. And those who warn most of some mythical civil war are those most likely to incite one.