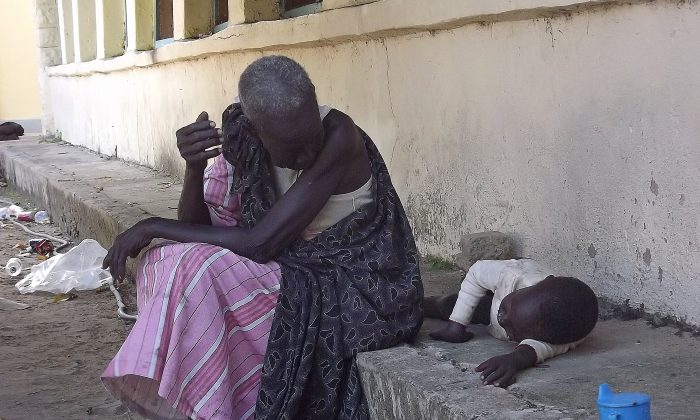 A South Sudanese woman with a child sits on Dec. 25 at the main hospital in Bor which troops loyal to President Salva Kiir re-captured from rebel forces. South Sudan is caught in a political struggle turned ethnic cleansing, with an estimated death-toll in the thousands, and the number of displaced people approaching 100,000. (Samir Bol/AFP/Getty Images)
Africa

The youngest nation in the world is rampantly approaching a state of civil war, as ethnic clashes between two major ethnicities—Dinka, to which South Sudanese President Salva Kiir belongs, and Nuer, from which the former vice-president Dr. Riek Machar originates—has engulfed five out of 10 states of South Sudan within a week, and has resulted so far in thousands of deaths and displaced tens of thousands.

Kiir ousted Machar from office last July and now accuses him of a coup, which Machar denies.

“It is clearly moving towards a state of civil war,” said Nico Plooijer, manager of the Africa Program at IKV Pax Christi, a peacekeeping organization based in the Netherlands.

“The extremely dangerous part of this is that the killings continue,” noted Plooijer. “If a war breaks out, we are back to square one.”

South Sudan won a long-awaited independence from its northern neighbor, Sudan, in 2011, after 20 years in civil war and continued fighting in Darfur and in the border areas of Abyei, Blue Nile, and South Kordofan.

Ploojer, who is now evacuating his staff from the capital, Juba, said that he lost the Christmas spirit as soon as the fighting in South Sudan broke out on Dec. 15. He said that the only way for the killings to stop is for both leaders, Kiir and Machar, to order an immediate ceasefire, otherwise the next step is war which will be very difficult to stop.

“They have the power and responsibility to stop it now,” he said, just days before a ceasefire was called by South Sudan. It is, however, a shaky ceasefire.

South Sudan’s government agreed Friday at a meeting of East African leaders to end hostilities against rebels accused of trying to overthrow the young country, but the cease-fire was quickly thrown into doubt because the head of the rebellion was not invited.

An army spokesman suggested the fighting could go on despite the announcement by politicians in a faraway capital.

On Christmas eve, President Kiir had called on his soldiers to not commit tribal crimes, warning that the perpetrators will be punished. However, he was reluctant to order a ceasefire.

Kiir also rejected any preconditions for having negotiations with Machar. The latter required the release of several political detainees before peace talks could commence.

“If we cannot make them stop this killing, we will have the newest country in the world bathing in blood instead of development,” said Ploojer.

According to the UN’s top humanitarian official in South Sudan, Toby Lanzer, the official death toll so far has reached 500, but it is believed to be in thousands. The UN also reported finding two mass graves in Juba and one in Bantiu, Unity State.

More than 90,000 people have been displaced during the last couple of weeks, including 58,000 people in UN peacekeeping bases.

Last week, the United Nations Security Council approved the doubling of peacekeeping forces in the UN Mission in South Sudan (UNMISS) to 12,500 military personnel and 1,323 police, and adopted a resolution, which demanded “immediate cessation of hostilities and immediate opening of a dialogue between the rival factions.”

A War That Cannot Be Won?

But some think the civil war is already in place.

“With nationals and foreigners leaving Juba in panic, fighting and tension in half of the country, [the] rising death toll and displaced people, and problems within the ruling party, you can see the magnitude of what is happening,” said Luka Biong Deng, South Sudanese expatriate and a fellow at Harvard Kennedy School.

“The civil war is already in South Sudan.”

It all started with an apparently insignificant clash on ethnic lines between President Salva Kiir’s guards two weeks ago. But it quickly ignited long-held political discontent within the ruling party SPLM and Machar’s grievances towards Kiir.

The main question which they cannot resolve, Deng said, is who to be the leader.

But instead of resolving these issues on the table, politicians let the masses to deal with them, with tragic consequences.

“This war is not winnable,” said Deng. “There is no way you can sustain the power and the leadership through force.”

The way forward, in Deng’s opinion, is for both leaders agree on the peace and stability of the country, and then contest for the leader’s position, allowing the people to decide who will be president.

“The vote of the people cannot be gained through violence,” concluded Deng.

The next presidential elections are scheduled for 2015. Both Machar and Kiir have declared their willingness to run.

Analysts think Machar is trying to stand out and gain political dividends ahead of the elections. But his chances are questionable.

“Machar cannot overthrow Salva Kiir,” said John Akec, chairperson of Academics and Researchers Forum for Development, a think-tank based in Juba. “He has no chance, … especially if he appeals to ethnic sentiments—not by war and not by vote.”

Dinka is the largest ethnicity in South Sudan, numbering about 2.5 to 3 million people, while Nuer is the second largest with up to 2 million, according to the 2008 South Sudan census.

Akec says that out of a total of 10 states in the country, Dinka is dominant in seven, with three states being almost exclusively Dinka: Bahr el Ghazal, Jonglei, and Upper Nile. Nuer has a majority only in the oil-rich Unity State.

President Kiir is also criticized, mainly for giving excessive freedom to his ministers and allowing corruption and waste of money. But still, he is considered mature and able to rule a complex country like South Sudan. And when Machar could not make his way into the ruling party SPLM, his last option was to play the ethnic card.

“His only chance is to have the international community pressure Kiir to accommodate him back in the cabinet,” said Akec.

If that was his goal, it worked, at least in the sense that it brought attention to South Sudan. The presidents of Kenya and Ethiopia arrived in Juba for closed-door talks with President Kiir, in order to mediate and broker peace between the government and the opposition. The talks will continue for several days.