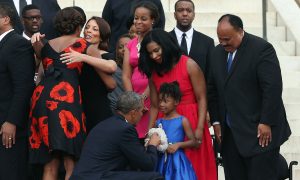 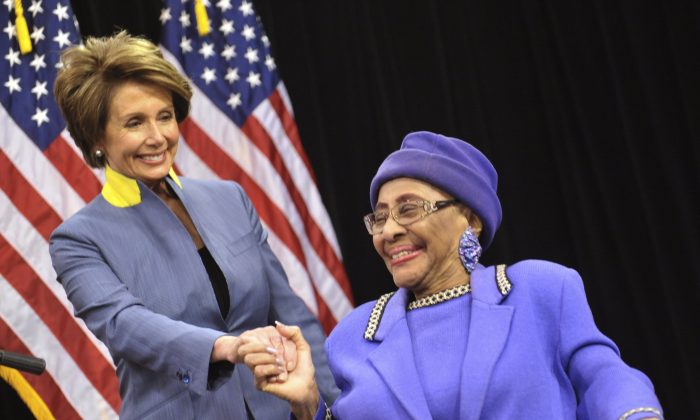 Godmother, little warrior, field organizer, and nurturer of the next generation
By Mary Silver
biggersmaller
Print

The 4-foot-11-inch “Little Warrior” worked for civil rights starting in 1936 at age 12, when she demanded to be allowed in an all-white school bus in her home state of Texas. After that she never stopped.

She worked as a field organizer for the Rev. Martin Luther King Jr., co-founded the Chicago chapter of Operation Breadbasket, sewed one of the first squares on the AIDS quilt, and more recently focused concern on Chicago’s gun violence and changes to the Voting Rights Act.

Barrow embodied the principal of generativity, a term Eric Erickson coined to describe concern for establishing and guiding the next generation. She became a wise elder, and she embraced scores of godchildren.

She lived to see President Barack Obama give a speech at the 50th anniversary of the March 7 Bloody Sunday march in Selma, Ala. She organized and marched in the Selma and Washington marches of the 1960s.

I was proud to count myself among the more than 100 men and women she called her Godchildren.
— President Barack Obama

The president counted himself among her godchildren. “To Michelle and me, she was a constant inspiration, a lifelong mentor, and a very dear friend,” he said in a statement. “I was proud to count myself among the more than 100 men and women she called her ‘Godchildren,’ and worked hard to live up to her example. I still do.”

Barrow had been hospitalized for treatment of a blood clot in her lung and died early Thursday, said fellow activist the Rev. Michael Pfleger.

“She’s one of those icons in the movement we’ve been able to hold onto for a long time, to learn from, to be loved by, to be challenged by,” Pfleger said.

The civil rights movement veterans are a uniquely great subset of the greatest generation. Fewer and fewer are left, both the famous and the less well known. I think they are a national treasure.

In Atlanta, they have always been easy to come across, working in schools, signing books, giving talks at museums, hosting events, helping children in afterschool programs, teaching at colleges, being mayor, starting community gardens, serving in Congress, preaching.

I was walking through an Atlanta park and found a former Freedom Rider manning a table with a pile of his books about his experiences. Anthony Harris is a college professor, and he brought his memoir and his novel to a festival at the park to tell people what it was like “to have been in the presence of so many courageous men and women whose indomitable spirits might have been bent but could never be broken.” People like Barrow.

I remember covering a 2012 voting rights rally at the state capital and standing next to a man who was filming the event to share with his six grandchildren. Rep. John Lewis, of King’s inner circle, was speaking of how the vote is “nearly sacred.”

Indicating an elegant and upright man behind Lewis, the videographer grandfather asked me quietly “Is that C.T. Vivian?”

Yes, it was. Vivian, also one of King’s inner circle, was honored with the Presidential Medal of Freedom, participated in the Freedom Rides, and directed the Southern Christian Leadership Conference (SCLC). And at age 88, he was out marching in the streets to promote voting rights.

Like Vivian, Lewis, Harris, and Barrow, many of the movement veterans spent the rest of their lives trying to help others and trying to make America better. Any of us who have the chance to be near them should grab it.

Barrow explained her sense of creating connections and building a good future.

“I opened my house up to all of the powerful women in the movement—Coretta Scott King, Dorothy Height, Addie Wyatt. I hung around with the people that had the power. That’s how I learned,” the Chicago Sun-Times reported.

“We have to teach this generation, train more Corettas, more Addies, more Dorothys. If these youth don’t know whose shoulders they stand on, they’ll take us back to slavery. And I believe that’s why the Lord is still keeping me here.”