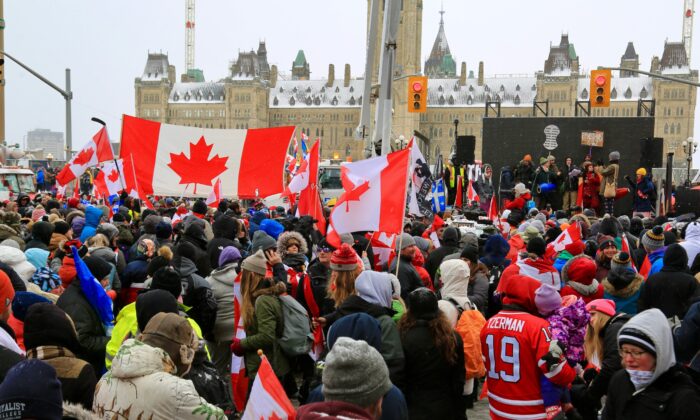 Civil liberties groups and some law professors say the invoking of the Emergencies Act by Prime Minister Justin Trudeau to deal with ongoing mandate protests is on shaky ground and risks setting a dangerous precedent.

In a reaction to Trudeau’s announcement on Feb. 14, the Canadian Civil Liberties Association (CCLA) said the government “has not met the threshold necessary” to invoke the act, since the protests do not seriously threaten the ability of the government to “preserve the sovereignty, security and territorial integrity of Canada” as stated in the act.

“Governments regularly deal with difficult situations, and do so using powers granted to them by democratically elected representatives. Emergency legislation should not be normalized. It threatens our democracy and our civil liberties,” CCLA wrote on Twitter.

The Canadian Constitution Foundation (CCF) says the act can only be invoked in “narrow circumstances” and that provincial police forces demonstrated they have adequate powers to enforce the law when they recently cleared the Ambassador Bridge protest in Windsor.

“The CCF is concerned by the federal government’s historic invocation of the Emergencies Act,” says the CCF in a Feb. 14 statement.

“The government has set a dangerous precedent for the right to free assembly and protest, declaring the protests occurring in Ottawa and elsewhere across the country to be unlawful without any further explanation.”

The CCF also expressed concerns about Ottawa’s recent move to regulate crowdfunding platforms and cryptocurrencies under the Terrorist Financing Act, while expanding banks’ powers to freeze or seize financial assets without a court order, saying these “measures present the clear opportunity for undermining rights to property and privacy.”

Trudeau justified invoking the Emergencies Act by saying the protests have not been peaceful.

“The blockades are harming our economy and endangering public safety. Critical supply chains have been disrupted,” he said at a press conference on Feb. 14, referring to the demonstrations at some of the country’s borders.

Prior to Trudeau’s announcement, the Justice Centre for Constitutional Freedoms (JCCF), which represents the organizers of the Freedom Convoy, said the protests in Ottawa have been peaceful and that it will immediately challenge the decision to invoke the act in court.

“Peaceful protesters who feed the homeless, shovel snow, pick up garbage, dance in the streets, play street hockey, wave Canadian flags, sing the national anthem and set up bouncy castles for children do not ‘seriously endanger the lives, health or safety of Canadians,’ nor are these peaceful activities ‘of such proportions or nature as to exceed the capacity or authority of a province to deal with it,” said Jay Cameron, litigation director at the JCCF, in a Feb. 14 press release.

Cameron said the government “will have to demonstrate to a court how existing powers, both municipal and provincial laws, such as bylaws, are insufficient to deal with any issues.”

The Democracy Fund (TDF) called the invoking of the act “completely unwarranted” and said on Feb. 15 it has been sending its lawyers to Freedom Convoy protests “to ensure that everyone understands their fundamental freedoms and their rights to due process under the Canadian Charter of Rights and Freedoms.”

“We will continue to support peaceful protestors associated with the Freedom Convoy and persons who are arrested for non-violent acts of civil disobedience,” the TDF said in statement.

TDF is also offering free legal assistance to fight fines given to protesting truckers and their supporters.

Ryan Alford, a law professor at Lakehead University, wrote on Twitter that the “situation in Ottawa is eminently *not* a valid basis for the invocation of the Emergencies Act.”

“Treating it as a public order emergency that authorizes a latter-day War Measures Act will create an appalling precedent,” he said on Feb. 14.

Dwight Newman, a law professor at the University of Saskatchewan, tweeted that he was “open to the possibility that the Emergencies Act was a legally available option.”

“But being able to invoke the Act depends on criteria in sections 2 and 16-17 of the Act (which use by reference some definitions from the CSIS Act). I am disappointed the government has not yet put forward its evidence to support the claim that it meets those legal standards.”

Newman said if such evidence is not put forward promptly, it will “leave festering doubts” that the government is using the act legitimately.