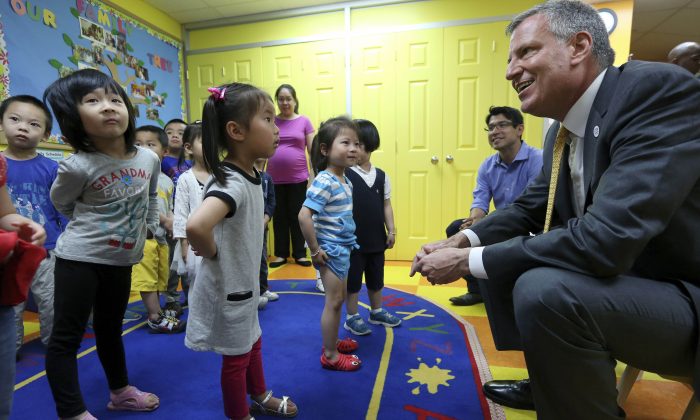 NEW YORK—The city’s education department is ramping up its pre-K efforts with 10,000 new seats in community-based early childhood centers to be announced on Friday.

The new seats are part of Mayor Bill de Blasio’s plan to provide universal pre-K to all four year olds in the city by the school year starting in September 2015. The initiative is funded from the state budget.

There are already 15,000 full-day pre-K seats open for applications. The education department is promoting the pre-K service heavily with posters in most schools and more than $600,000 spent on advertising.

Applications for pre-K in community-based centers will be accepted until June 26. Parents who applied for school-based pre-K seats by the early April 23 deadline will receive decisions from their schools on June 5.

“It is crucially important for parents to apply for any sites that make sense for them,” de Blasio said. “They can apply for more than one site–that’s fine.”

The mayor made the announcement at an early childhood center in Brooklyn’s Chinatown. His pre-K announcements are usually coupled with classrooms visits, which usually depart from scripted speeches.

The mayor, who is nearly six-foot-six-inches tall, plopped into a child-sized chair and asked a group of mostly Asian four and five year olds what they have been learning. The children told him that they have been working on a dance and de Blasio asked for a performance.

The song and dance that followed, called “The Wheels on the Bus,” had both de Blasio and a local Council member Carlos Menchaca beaming and clapping. Even the mayor’s bodyguards, usually reserved, broke into a smile.