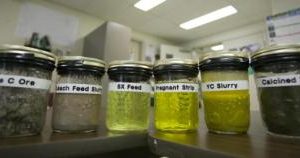 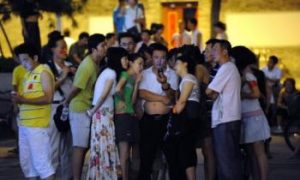 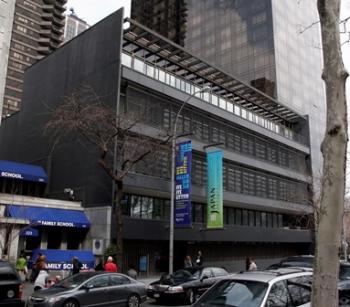 NEW YORK—As one of the City Landmarks and Preservation Committee’s newest additions to protected status, the Japan Society Headquarters on East 37th Street is also the youngest structure in the city to receive the designation.

Built just 40 years ago, the quietly modernist structure overlooks Dag Hammarskjold Plaza at the east end of 37th Street amidst the United Nations buildings and the many consulates that dot the area. Japanese architect Junzo Yoshimura designed the building. According to the Landmark’s Commission report written by Matthew A. Postal, Yoshimura was most likely the first Japanese citizen to design a permanent structure in New York City.

The five-story building has concrete walls to the east, west, and north sides that are painted black, in contrast to the many granite and limestone buildings in the area. The long horizontal terraces of the upper floors are faced in dark bronze.

The second story terrace is open while the windows on the third and fourth floors are partially masked by dark metal screens, the fifth floor windows are again open to the sky and capped by a pergola.

The ground floor façade is decorated with vertical wooden slats and the glass front doors have simple brass handles. The design has been described as a restrained use of traditional Japanese influences expressed in modern materials.

Principle architect Yoshimura (1908–1997), worked with George G. Shimamoto on the design. Shimamoto was also born in Japan and immigrated to the United States when he was 16 years old. The New York Society of Architects gave a Certificate of Merit to Yoshimura’s design in 1972.

Previous to his work on Japan House Yoshimura had designed two structures at the Rockefeller estate near Tarrytown, N.Y., as well as a temporary exhibit at the Museum of Modern Art in 1954.