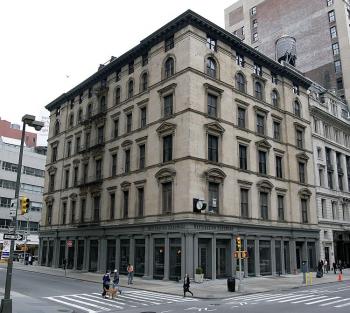 NEW YORK—As the stretch of Broadway between Union Square and Madison Square Park became known as “Ladies’ Mile,” in the latter half of the 19th century, residential buildings were converted to commercial storefronts, and new buildings were constructed to create strings of retail stores offering dry goods, clothing, and home furnishings. The fashionable shopping district also included sections of Fifth and Sixth avenues.

Architectural developments in the years following the Civil War reflected changes in building technology, manufacturing, and commerce. Broadway became the most exclusive shopping district in the city, catering to the “carriage trade.” Stores were made accessible by the elevated train that ran along Sixth Avenue; the new train, installed in 1878, brought shoppers from around the city to seek the latest styles along “Fashion Row” on Sixth Avenue.

Due south of the Flatiron building, and predating it by 40 years, is the Mortimer Building. The six-story Italianate brownstone has three full facades of nearly 250 feet of street frontage, giving it a solid retail presence along Fifth Avenue on the west, Broadway to the east, and East 22nd Street along its north side. The building was designed by Griffith Thomas, who was described in The Architectural Record as “the most fashionable architect of his generation.”

At street level the simple stately structure has fluted columns and pilasters topped with Corinthian capitals flanking tall storefront windows. The four floors above have windows framed in three alternating styles, some with pediments, some with raised lintels and the top row of windows are framed in arches with keystones. In 1912 a sixth floor was created by enlarging the attic space and raising the roof; the addition added another row of unframed windows across the top of the building.

The building currently has one tenant on the ground floor, the home furnishing retail store Restoration Hardware.

Griffith Thomas is credited for several other New York City buildings including the Gunther building in Soho; the center section of the old Astor library, what is now the Joseph Papp Public Theater on Lafayette Street; and The Arnold Constable Dry Goods Store on Broadway at West 19th Street, now home to the ABC Carpet store.