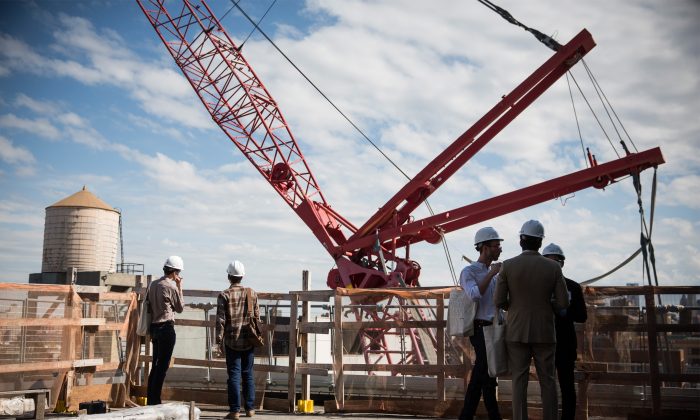 Members of the media explore an outside terrace at the Whitney Museum, which is still under construction, during a media availability on May 1, 2014 in New York City. The Whitney Museum, which announced it's inaugural exhibits in its new space, will open in the Meat Packing District in spring of 2015. (Andrew Burton/Getty Images)
New York

NEW YORK—The city is studying industrial and manufacturing businesses to see where jobs are growing and what sort of wages they pay, according to Kyle Kimball, president of the New York City Economic Development Corporation.

Kimball said those who advocate for industrial businesses, himself included, tend to talk about preservation—keeping manufacturing-zoned areas from being rezoned. He said there is a need to modernize how the city zones and creates industrial zones.

But according to Carl Weisbrod, the commissioner of the Department of City Planning, the city should not be thinking about expanding industrial areas.

“At least not horizontally,” Weisbrod said. “Historically manufacturing had to be very horizontal and it’s one of the reasons New York City lost so many, many jobs over the past 70 years … but now given technology, manufacturing no longer has to be in all cases horizontal; it can be vertical.”

Industrial space is cheap because the industry has not been invested in, Weisbrod said.

Kimball said creating a different zoning code for light manufacturing may be warranted.

Kimball, Weisbrod, Lusskin, and others, spoke Tuesday at the LIC Summit in Long Island City, an area which has been touted as the mixed-use model for the city. Long Island City incorporates a variety of industrial businesses and areas into a growing residential neighborhood and one of the city’s main central business districts.

There is everything from cupcakes to cement and everyone wants to grow, said Long Island City Partnership president Liz Lusskin.

The Bill de Blasio administration has said on multiple occasions that it supports the industrial sector, but the term itself is vague. Last month Deputy Mayor Alicia Glen and the Economic Development Corporation announced a $100 million investment for development at the Brooklyn Army Terminal.

“We could have said let’s build condos, but that’s not what we did,” Glen said later at a separate event.

But, as LIC epitomizes, the industrial sector covers a wide range of businesses. Businesses like cement making, warehousing, and trucking may not get as much support as tech companies.

“It’s a huge sector,” said Kimball. “You don’t want to live next to the cement person, but you’re fine living next to someone making interesting food.”

If the city decides to not support heavy industrial uses like the cement factories, it will be because those uses do not generate as many jobs as other companies or pay higher wages.

“You can’t fight market forces,” Kathryn Wylde, president of the Partnership for New York City, said. “We have to rethink how we’re thinking about these uses and industries not for sentimental purposes, but for how the city is going to prosper.”