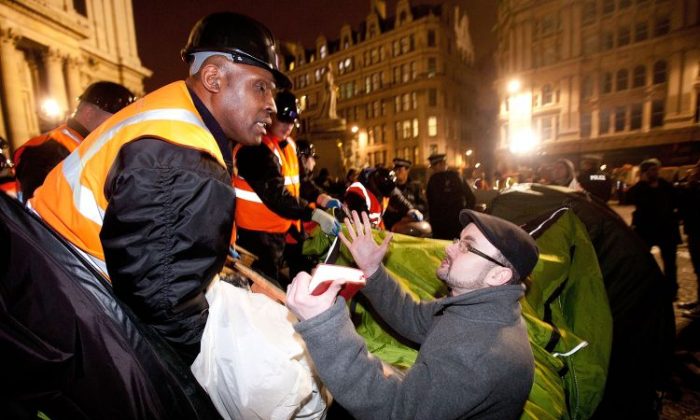 The Occupy London protest camp has been cleared from outside St Paul’s Cathedral after a four-month occupation.

Tents and other equipment used by protesters were dismantled and carried away by the City of London Corporation in the early hours Tuesday morning.

Policy Chairman Stuart Fraser said in a statement: “It is regrettable that it had to come to the need for removal, but the High Court Judgment speaks for itself. The site has now been cleared and the area is undergoing a deep clean. Some areas of the site may be cordoned off during this cleaning, but we will complete the work as quickly as possible, in order to return the site to its regular use.”

During the clearing, around 50 remaining tents were removed; occupiers themselves had removed about 100 tents following the court ruling last week.

The operation was largely peaceful, although 23 arrests were made, according to City of London police.

Representatives of the movement said that although they would take the opportunity to reflect and rest, the movement would be back, in some form or other.

“The City of London Corporation and St. Paul’s Cathedral have dismantled a camp and displaced a small community, but they will not derail a movement,” reads a statement from the press team on the Occupy London website.

“Be assured that plans are already afoot: plans of some ambition, employing a diversity of tactics and delivered with the aplomb you would expect from us. All will be revealed in time. May is one of our favorite months,” the statement continues.

A statement from St. Paul’s, said the cathedral regretted it came down to a court order to remove the camp, but said it would continue to promote the issues raised by the Occupy movement.

“In the past few months, we have all been made to re-examine important issues about social and economic justice and the role the cathedral can play,” reads the statement.

The city had argued that the camp hindered planning control, attracted crime, and interfered with a public right of way and the rights of worshippers in the cathedral. This argument was accepted by the High Court, which granted the order to clear the site. Protesters appealed the ruling, but lost.