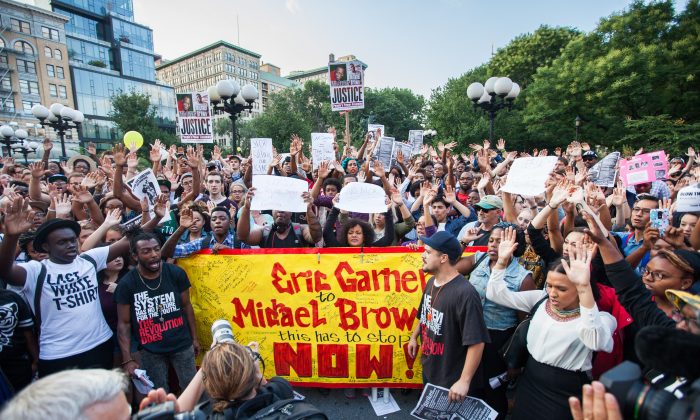 NEW YORK—About 800 people gathered in Manhattan’s Union Square Thursday night in response to a week of violence between police and residents in Ferguson, Mo. The violence was set off by the shooting death of Michael Brown, an 18-year-old African-American boy who lived in the St. Louis suburb, at the hands of a police officer.

Thursday’s gathering in Manhattan, which was largely silent, was part of a national protest coordinated throughout the United States in major cities and beyond. Some among the crowd did chant “Hands up don’t shoot” in reference to an eyewitness account that Brown yelled “don’t shoot” just before the officer, whose name had not been released as of Friday, fired on him.

Earlier Thursday, New York City Mayor Bill de Blasio said he was confident in the ability of police and city residents to conduct themselves safely in the case of a large-scale protest. Much of the controversy in Ferguson has come with the violent response of police to crowds rioting and looting.


“I think we have a very different reality here,” said de Blasio at an unrelated press conference Thursday afternoon.

“For decades and decades, this city has had the tradition of respecting and properly managing peaceful protests, the right of people to express themselves,” said de Blasio.