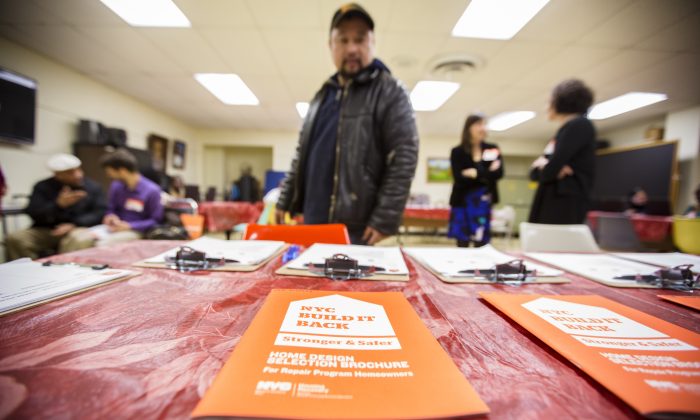 A man looks at a flier at a New York City Build It Back community meeting in Coney Island, Brooklyn, New York, on Feb. 18, 2014. (Edward Dai/Epoch Times)
New York

City Pays $5 Million in Salaries for Build It Back

NEW YORK—The city is paying $5 million in salaries to employees of the Build It Back program, which has helped less than 1 percent of the 20,000 registered homeowners since its launch a year ago.

The mayor’s Housing Recovery Office (HRO) employs 68 staffers who are paid $5 million collectively. HRO has administered Build It Back since the program was launched by former Mayor Michael Bloomberg. The salary information was obtained from the city through the Freedom of Information Act request.

According to the maximum advertised salaries, the city plans to pay an additional $1 million for 13 vacant Build It Back positions.

The annual salary for the head of Build It Back, Amy Peterson, is $181,000, according to the city. Her predecessor Kathryn Mallon was paid the same amount while running the program and working fulltime as a deputy director at the Department of Environmental Protection.

A number of other upper-level managers are also paid well over $100,000 apiece for positions such as facilities, contracts, and case management. Construction scoping and task leads are paid between $107,000 and $110,000 each.

Two other upper-level positions that the city is advertising to fill, budget director and senior procurement adviser, both offer a maximum of salary of $146,276.

The 18 jobs that pay over $100,000 each for their work on the program, including the maximum salary of vacant positions, comes to more than $2.2 million.

Build It Back employs directors to oversee borough operations, but is currently advertising to fill three vacant borough directors positions for Brooklyn, Queens, and Staten Island. The salary range is between $56,937 to $88,649 per year.

A number of analysts and auditors are also employed by the city under Build It Back. They are collectively paid about $800,000 a year. Liaisons, coordinators, and administrative staff are among the lowest-paid, making an average of about $37,000 a year.

The largest portion of staff, about two dozen mid-level managers and analysts, are paid between $50,000 to $75,000 a year each.

Build It Back also employs staff that work under the auspices of various contractors. Though a breakdown of contractor staff salaries was not immediately available, the city’s Sandy Funding Tracker states that a dozen contractors and their subsidiaries hold contracts worth more than $484.6 million in total. They have already spent almost $20 million.

The city’s Sandy recovery work has been mostly paid for with federal disaster relief funds.

Build It Back has been particularly controversial among the 20,000 homeowners who are registered with the program for help in rebuilding and repairing their storm-damaged or destroyed homes.

The city’s comptroller, Scott Stringer, recently launched an audit of Build It Back. Stringer has also created a special Superstorm Sandy unit within his office and is in the middle of conducting town hall-style meetings with impacted residents to learn about the specific problems they have faced.