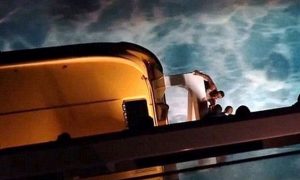 The city of Muskegon, Michigan is hoping to attract cruise ship lines to dock at its port in an expansion effort.

The city, with a population of around 38,500, is the largest populated city on the eastern shores of Lake Michigan, and has ramped up efforts after a cruise ship stopped in its port last fall.

A 200-passenger Pearl Mist cruise ship docked in Muskegon in September 2015 after it was unable to dock at its regularly-scheduled stop in nearby Holland.

The cruise ship was the first to arrive in Muskegon for decades, and prompted city officials to try to get at least two cruise ship lines to have scheduled stops.

One of them is the Pearl SeaseCruises, which owns Pearl Mist.

“We have done a lot of research and we have discovered our port infrastructure works perfectly for cruise ships. … Muskegon’s deep water port is a safe harbor for these ships,” Muskegon Lakeshore Chamber of Commerce President Cindy Larsen told MLive.

City officials are hoping to have as many as 14 ship stops in 2016.

Day trips for passengers on the ships could include a maritime museum tour to the USS Silversides Submarine Museum, the USS LST 393 Veterans Museum, and the SS Milwaukee Clipper. There’s also a number of historic homes in the area, and an art museum downtown.