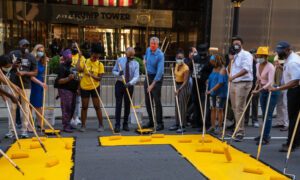 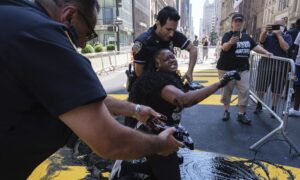 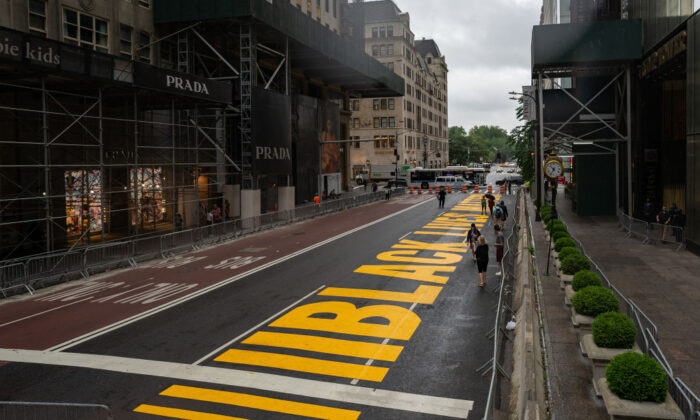 The Phoenix City Council has denied a proposal to have a Black Lives Matter street mural downtown.

The request for a BLM street mural was made by Gizette Knight who opened a petition on Change.org two months ago calling on city residents for support.

A letter from Ed Zuercher, the city manager, sent to Knight on Sept. 9, said that “based on existing regulations governing allowable markings in the street, as well as overriding concerns with safety, risks, and federal guidelines for markings on streets, the City of Phoenix cannot accommodate your request.”

“As you were made aware during previous discussions with Street Transportation staff, installation of a mural, or any other non-standard markings, on a city street (in public rights of way) is not currently allowed,” Zuercher wrote, adding, “I appreciate your passion for this project.”

Phoenix city councilman for District 6, Sal DiCiccio, posted a copy of the letter on Twitter, commenting, “This is government Speak for: ‘Public would have handed us our ass if we allowed the BLM mural to happen.'”

This is Government Speak for: “Public would have handed us our ass if we allowed the BLM mural to happen.”

A city meeting to discuss the mural was scheduled on Sept. 2 (pdf) to discuss a report that “provides information to and requests direction from the Transportation, Infrastructure and Innovation Subcommittee on a potential pilot project for the installation of a Black Lives Matter street mural in downtown Phoenix.” The agenda item was submitted by Mario Paniagua, the deputy city manager, and the Street Transportation Department.

However, the item was withdrawn without a vote.

DiCiccio posted on Twitter a copy of a withdrawal notice addressed from Paniagua to the Transportation, Infrastructure and Innovation Subcommittee, which read, “At the request of Subcommittee members, this memo requests a withdrawal of [the agenda] regarding discussion on Street Murals … As a result, the City’s existing policies on street markings remain in place.”

Patch.com noted that after the withdrawal, the issue was scheduled for discussion at the city council’s most recent executive session. But discussions will not be made public. A spokesperson for DiCiccio told the outlet that there did not appear to be much support for the proposal and as such, the sponsor requested that it be moved to the executive session.

An updated message on the Change.org petition by Knight appeared to respond to the move, saying, “Recently, Phoenix was given the opportunity to show their resolve to stand with their Black Community and leave a symbol that recognizes the need for change. However, the city officials failed to act and greeted this opportunity with opposition.”

The petition goes on to request that Mayor Kate Gallego “not hesitate and take the lead” to grant permission to “paint the mural on the city street so that we can ban[d] together as one community,” Knight wrote. As of late Sept. 10, the petition to Mayor Kate Gallego has collected 3,105 signatures.

The Epoch Times has contacted the mayor’s office for comment.

Black Lives Matter Phoenix Metro wrote on Twitter in late August, “Less murals. More action.” In a lengthy statement on Aug. 31 to the Phoenix City Council, the group wrote, “Continue to say [Black Lives Matter] if you will, but don’t use a mural to show it. Rather, let us in the negotiation process for the new contract with the police union, defund the police, and allocate that money where it is truly needed, and fire the officers involved in the abuse or death of our community members. Their lives should matter to you more than a mural.”

Another group, the Black Phoenix Organizing Collective, called the mural an “empty gesture.” In a statement published by Fox10phoenix.com, the group said that city murals are an example of “the co-optation of protest and resistance that does nothing to serve the people who need it most.”

“Paint on the street won’t stop cops from using Black people for target practice,” the activist group said. “While adding insult to injury, the proposed mural would exist between two historic sundown towns—towns where Black people weren’t welcome, and where Black people are still subject to police violence, deprived of shelter, and the ability to determine our own lives.”

“If Phoenix believes that Black lives matter, it must fulfill and exceed the basic needs of our Black communities, instead of wasting time, energy, and resources on self-congratulatory projects. In order to live safe and dignified lives in Phoenix, Black people demand structural change. We don’t want symbolic solidarity—we demand action,” the group added.

The Phoenix Law Enforcement Association, a police advocacy group, also appeared to oppose the idea for a mural. On Aug. 25, the group released a statement on Facebook saying, “Members of the Black Lives Matter movement and at least one supporter on the Phoenix City Council want to shut down one of the busiest streets in downtown Phoenix for weeks in order to paint portraits of their heroes on the pavement.

“If this is allowed, then shouldn’t we be able to have similar portraits of our Fallen Heroes painted on the streets in front of the respective police facilities they were assigned to?” the group said.