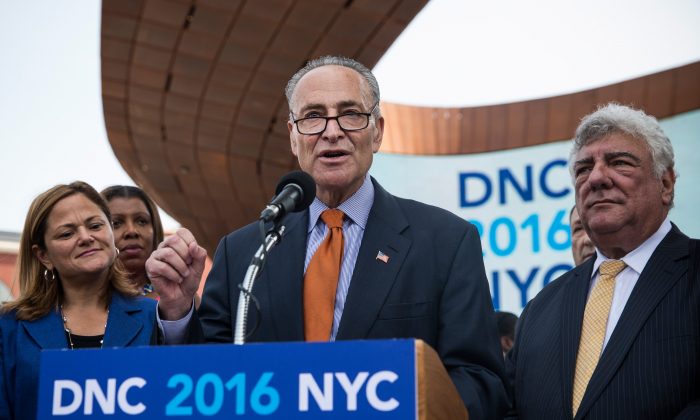 U.S. Sen. Chuck Schumer (D-NY) speaks at a press conference pitching the borough of Brooklyn to host the 2016 Democratic National Convention (DNC) outside the Barclay Center on August 11, 2014 in the Brooklyn borough of New York City. Brooklyn will have to compete for the DNC alongside other cities including Philadelphia, PA and Columbus, OH. (Photo by Andrew Burton/Getty Images)
New York

NEW YORK—New York’s leading politicians pitched the Barclays Center in Brooklyn as the perfect venue for the 2016 Democratic National Convention on Monday to visiting DNC officials, who are on a two-day tour of the city hosted by mayor de Blasio.

“We have swag on lockdown,” NYC Council member Lauria Cumbo said at the press conference. “This is going to be epic, people are gonna talk about this for generations.”

The Barclays Center is located in the district Cumbo represents.

Before the Democratic Party delegation were led into the Barclays Center by a brass marching band on blue carpets, they were entreated by elected NYC officials and sen. Chuck Schumer (D-NY).

The DNC’s Technical Advisory Committee is tasked with inspecting the city’s security, transportation, and the Barclays Center for its suitability for the convention. Its two-day itinerary includes the Metropolitan Museum of Art, the Rockefeller Center, and the Brooklyn Academy of Music.

Schumer led the charge in the near-hagiographic appraisal, firstly extolling Brooklyn for its encyclopedic diversity.

“In my old congressional district there was one elementary school that had ESL (English as Second Language) classes for 47 languages, no place can top that diversity,” he said, enumerating all the different cultures that can be found in Brooklyn, including but not limited to, Polish culture in Greenpoint, Italian in Bensonhurst, Caribbean in Flatbush, and Russian in Brighton Beach.

“You also have the rarely seen hipster culture in Williamsburg,” he quipped.

The senator, a longtime resident of Park Slope in Brooklyn, was quick to swat away concerns about the alleged dearth of hotels surrounding the site, where 35,000 expected attendees are to commute for three days.

“The midtown Manhattan hotels are a lot closer to the Barclays Center than the [Democratic] convention centers in Chicago and Los Angeles and North Carolina were to their hotels,” he said. “I remember sitting in LA traffic, I remember the long bus rides in Chicago, there’s gonna be nothing like it here.”

Schumer also noted that the borough wasn’t short on cultural accomplishments, past and present.

“It’s old school, from Jackie Gleason to Peter Lugers to Barbara Streisand, and it’s new school, from Lena Dunham to Etsy,” he said.

Despite Brooklyn’s iconic status in the popular imagination, it’s not the front-runner as the host for the 2016 DNC. That title reportedly belongs to Philadelphia, Pennsylvania, historically a swing-state in presidential elections.

When asked what political assets Brooklyn had to compensate for New York’s lack of swing-status status, Schumer replied that Pennsylvania was not a swing-state, but a Democratic one, and that what’s important is who “represents the future.”

“No competitor represents the future like Brooklyn,” he said.

Other stressed Brooklyn’s deep historical roots as a leading the country forward in history, dating back to before the Republic was founded.

“Brooklyn is where George Washington stared down the British, where Jackie Robinson took the field and changed American history, where the country’s middle class was born,” said Melissa Mark-Viverito, speaker of the New York City Council.

Bruce Ratner, the developer behind the Barclays Center, touted that all of its employees are unionized, and that most are local hires.

“We are the home of the national fight to empower workers and to protect our families, we stand with fast-food workers and other workers to insure that they have a living wage,” said the city’s Public Advocate Tish James.

The mayor was not present at the press conference Monday morning, but will attend a dinner at the Metropolitan Museum with the advisory commmittee in the evening.

Earlier in the morning, de Blasio had posted a picture on Instagram with a “DNC 2016 NYC” button pinned on his shirt earlier than day.

Economics of the Convention

City official put the price tag of the convention at around $140 million, with most of it being funded by private donors and the federal government.

In preparation for a potential convention, the Metropolitan Transportation Authority has already arranged no-traffic alleyways and designated ferries between Brooklyn and Manhattan.

Politico has obtained a list of 70 donors committed to the project, ranging from captains of industry—Goldman Sachs Chairman Lloyd Blankfein and former Facebook president and Napster founder Sean Parker forming the tip of the iceberg—to cultural icons like designer Diane von Furstenberg and Sex and the City star Cynthia Nixon.

Private contributions are expected to pad between $80 and $100 million of the costs, with Washington giving a $50 million reimbursement to the city, itself putting up less than $10 million.

“Whatever resources we invest in this convention, we will get a return in the hundreds of millions of dollars,” said NYC deputy mayor Alicia Glen, arguing that the convention will bring Brooklyn greater national prominence and that the convention should be thought of as a long-term investment.

When the city held the 2004 Republican National Convention, the host committee has raised $84 million.

Also in the race to host the convention are Birmingham, Alabama; Columbus, Ohio, another swing state, and Phoenix, Arizona, each city having never previously hosted a presidential nominating convention.

The announcement for the 2016 DNC location is expected in early 2015.