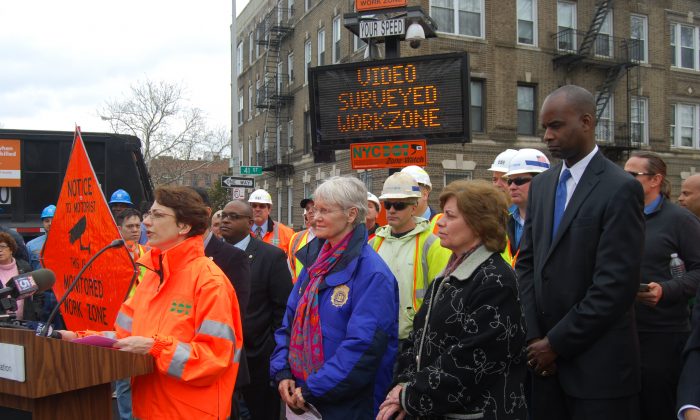 NEW YORK—Drivers pass through work zones in the city on a daily basis, whether they’re blocked off or not.

They usually slow down, according to a group of Department of Transportation (DOT) workers resurfacing a block along Sunset Park in Brooklyn, but they can be persistent and frequent.

“They’ll say, oh, my apartment’s right there, there’s no parking lot nearby, I just have to get something,” one worker said with a shrug. “It happens.”

On Tuesday, city officials and utilities executives launched the improved Zone Watch program at a road resurfacing work zone adjacent to Sunset Park on 41st Street in Brooklyn. DOT will use mobile cameras to better protect crews and people on the streets.

“New Yorkers are known for wanting to get somewhere fast,” said Denise Richardson, managing director of the General Contractors Association of New York.

About 600 deaths occur nationwide in road work zones, and the number has stayed at that level the last couple of years, Richardson said. In New York state, there were 16 deaths in 2012, one of which was in New York City.

There have been seven deaths of DOT workers in work zones in the last two decades.

“Dangerous driving in work zones threatens the lives of the men and women who maintain our streets, bridges, and other infrastructure,” said DOT commissioner Polly Trottenberg. The awareness program is in line with the mayor’s Vision Zero initiative, which is largely dependent on DOT work.

The initiative adds nine camera-equipped trailers and additional cameras to be mounted on DOT trucks. The cameras and speed boards will alert drivers of their speeds and footage will be used for enforcement if necessary.

“They usually speed if it’s on the highway,” said John Paterno, a director with DOT. Even if the work zone is blocked off, drivers often try to wind through construction cones and barrels and make their way through, he said.

Department of Environmental Protection commissioner Emily Lloyd said a lot of DEP work pertains to pedestrians as well as drivers. Much of the infrastructure DEP needs to get to is in the middle of the road, but there is frequently work that requires lifting manholes closer to the street edge and work on corners of intersections.

National Grid, Con Edison, and Verizon are among the utility companies frequently working on New York’s roads. Representatives joined union workers and leaders to urge drivers to slow down and stay safe.

As the weather warms pothole season begins, work zones will be seen in every borough of the city’s streets. About 284,000 potholes have been filled as of April 8, over twice the count from last year, and the department expects more to come.