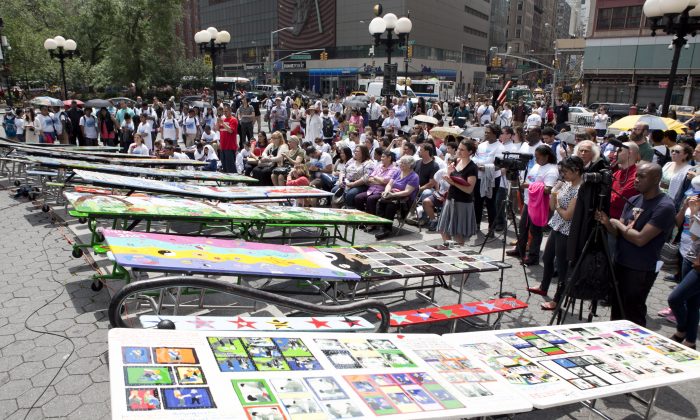 NEW YORK—School lunch benches were repainted with messages of hope and resilience as children from 10 schools across New York City’s five boroughs came together to address social issues in their communities and the world. The event was held at Union Square Park on May 23.

The art expressed the concerns of the children: global issues they are concerned about, and problems they face in their own communities. These ranged from the damage caused by Hurricane Sandy, to gun violence, to drug abuse.

“On our table, we discuss bullying, school dropouts, drug abuse. We just thought this was a really good topic because in the neighborhood that we live in, a lot of kids go through this stuff,” said Destiny Washington, a student at M.S. 45.

A View from the Lunchroom: Students Bringing Issues to the Table, was the largest student art exhibition in the history of New York City, and was set off by Learning through an Expanded Arts Program, and NYC Parks & Recreation.

Dennis Walcott, NYC schools chancellor, spoke to the children at the event, saying, “I am always proud to be here.”

Walcott said he took time speaking with students about “those social issues that they feel so strongly about, and looking at those issues being expressed through their artwork.”

The benches will be installed in 10 community parks around the city, and will be on display from June to August.