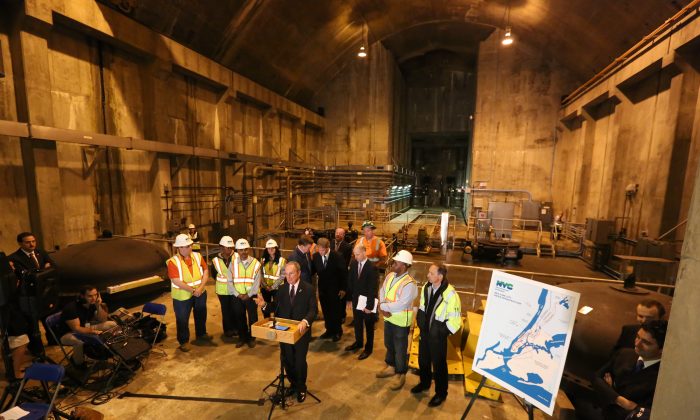 NEW YORK—When Manhattan residents turn on their water faucets today, fresh, clean, New York City water will pour from the tap. The water will remain the same, but the way it got there will be different. The city is set to flip the switch on a water tunnel on Oct. 16 construction for which began four decades ago.

The newly opened tunnel, Water Tunnel No. 3, was dubbed one of the largest infrastructure projects in New York City history. It was first proposed in 1954, with construction beginning in 1970. The new tunnel was designed to provide a backup for Tunnel No. 1 which has been in continuous operation since 1917.

The construction of the tunnel faced numerous delays, including a shutdown during the tough economic times of the 1970’s. On Wednesday, just over 40 years since it began, the city will finally flip the switch.

“There is no other infrastructure project that means more to protecting New York City’s future than the water tunnel,” Mayor Michael Bloomberg said at a press conference 200 feet below Central Park. “If we were to lose one of the tunnels without backup, that part of the city would be uninhabitable. You just can’t live where you don’t have water.”

Tunnels No. 1 and No. 2 have supplied city residents with uninterrupted service for nearly 100 years. Having Tunnel No. 3 online will allow the city to perform much needed inspections and maintenance on the aging tunnels. Once the Queens and Brooklyn sections of the third water tunnel are completed, which is expected by 2021, Tunnel No. 1 will be taken offline for repairs.

The new 8.5 mile tunnel was dug using tunnel-boring machines. So far, 82 million cubic feet of soil and rock have been removed from underground, enough to fill Madison Square Garden more than 200 times.

In 2003, Bloomberg faced intense criticism for vowing to continue funding the project, at a cost of $10 billion. Much like the mayors before him, his forward thinking will ensure drinking water flows to the City of New York for years to come.

“As much as this tunnel is a triumph of engineering and public works, it is perhaps a testament to the absolute necessity of long term planning and having the courage to carry those plans out,” said Deputy Mayor Cas Holloway.