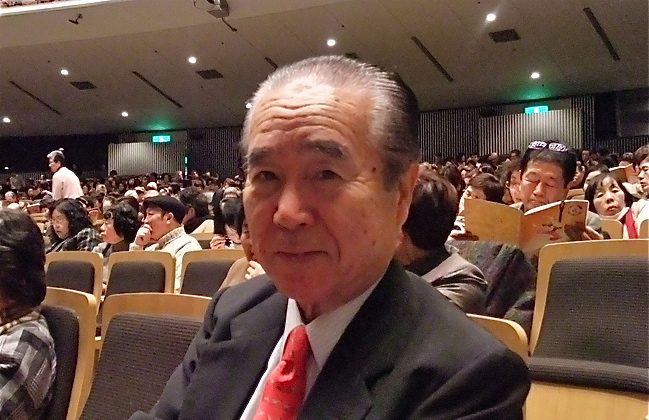 Takeshi Pinggang says the synchronization of the backdrops and the stage is perfect. (Niu Bin/The Epoch Times)
News

City Councilor: Shen Yun Performance Was a Big Surprise for Me

Accompanied by his wife, Hiroshima Councilor Mr. Tetsuo Doi watched a performance of Shen Yun and then, took the reporter’s hand and said excitedly, “I watched Shen Yun show for the first time. I never thought that a performance could be so unique. It was completely beyond what my imagination was capable of, and it was sure a big surprise for me. As soon as the curtain opened, the colorful, bright stage was so fascinating that I was totally carried away, as if it contained vibrant elements full of energy. It brought the audience indescribable joy and excitement.”

As a lover of classical Chinese dance, Mr. Doi said, “The level of group and solo dances was so superb that the performance on the stage was overwhelming. The dances performed by female actors were very gentle, elegant, brisk, but full of vitality.”

After thinking it over a bit, he said that the synchronization of the Chinese and Western musical instruments was innovative. Sitting just one step away from the full orchestra, he was fully immersed in its melodious world. “It’s so wonderful! So great!”

‘Backdrops and stage were perfectly synchronized’

Mr. Takeshi Pinggang, Councilor of Hiroshima City, watched the Shen Yun performance with his friends. In an interview, Mr. Pinggang said, “Watching the Shen Yun show for the first time, I found that the choreography of the dances was very unique and very creative. The Chinese histories were showcased step by step, which made me fully perceive the glory and greatness of the Chinese 5,000-year civilization.”

When it comes to the overall impression of the show, Mr. Pinggang said, “As there are so many difficult movements in Chinese classical dances, the performers must have gone through strenuous and painstaking training. The dances were very elegant and outstanding. The battle of good and evil is a very good theme to perform.”

He praised the dynamic backdrops, saying, “The changes of the scenes on the backdrops and the appearance of the live dancers on the stage were so quick and fabulous that the scenes on the backdrops and stage were perfectly synchronized. For example, in the program of “How the Monkey King Came to be,” the Monkey King jumped from the scene on backdrops to the reality on stage in a wink. It was indeed superb. The timing was just perfect. In addition, the design of the program and the choreography were really remarkable.”

He continued, “It was my first time seeing such a wonderful show, and I will definitely watch Shen Yun again with my family.”