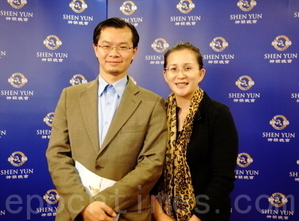 Though Zeng Xiujuan has watched Shen Yun’s performance twice in the past, upon hearing that Shen Yun’s program this year contained a Taiwanese Amei dance, she couldn’t wait to see the performance. She said, “Shen Yun’s costumes, music and dance as a whole are what have been selected. They are very appealing and pleasant to eyes, and can make people feel very relaxed and comfortable.”

She mentioned that she was really touched by the truthfulness and compassion implied in the program, especially the connotation of the program The Dafa Practitioner’s Magical Encounter. She said, “Through the program, more people are able to know the truth of the persecution against Falun Gong. Falun Gong is promoting the message of compassion.”

Zeng Xiujuan added, “Shen Yun’s performance conveyed the 5,000-year Chinese history, the essence of benevolence and kindness, as well as the principles of truthfulness, compassion and tolerance.”

Her husband, Mr. Chen Junan, Director of Tainan City Government’s Tourism Bureau, was very pleased to share what he thought of the Shen Yun performance. He said that while he still vividly remembered Shen Yun’s program last year, he enjoyed this year’s all-new program. He noted that he was especially impressed with the programs of How the Monkey King Came to Be and Joyful Little Monks, as both of them were very interesting and enjoyable.

He further noted that it is the good fortune of the people in Tainan that Shen Yun can perform here, and he looked forward to seeing the performance again.

‘The voice of tenor Hong Ming was heavenly!’

“It is indeed fabulous and very touching! Shen Yun’s stage effect is really fantastic. From the performers’ dancing skills and costumes, to the lighting and backdrops, all of the performing elements were world class,” she said.

Ms. Wu was deeply touched by all three vocalists’ outstanding singing skills, and she was especially enthralled by the superb performance of tenor Hong Ming. She noted, “The tenor’s voice was really like the sounds of nature.”

She also enjoyed the program The Choice and said it deeply touched her heart because the main characters, based on their conscience, made the right choice. “Because I think people must select a path that they think is good,” she said.

Ms. Wu said that as Shen Yun’s performance was the representation of the 5,000-year Chinese culture, she hoped her friends and others could also experience this rare and touching performance.

Kiwanis International is a global public service organization. The term ‘Kiwanis Club’ originated from the United States’ Indian KIWANIS. All members of Kiwanis Clubs are committed to serving children and communities, to transform the world and promote world peace.