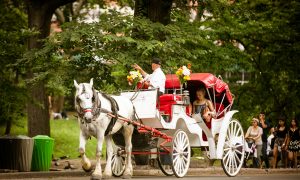 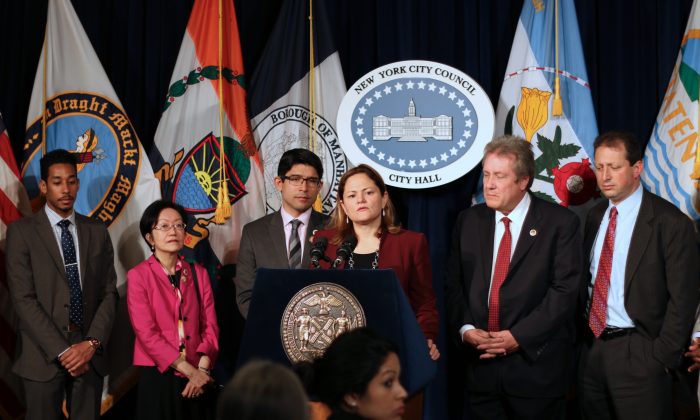 The bills will become law if signed by Mayor Bill de Blasio.

One bill mandates lower greenhouse gases, another removes illegal clothing collection bins from city streets, and the third allows housing officials to repair 50 distressed buildings and charge the landlords for the costs.

At the same time that climate change protesters and environment advocates rallied through the city and flooded Wall Street this past September, Council members at City Hall were pouring over their notes on the issue.

Backed by Queens Council member Costa Constantinides, the bill mandates an 80 percent reduction in the city’s greenhouse gas emissions by 2050 from a 2005 baseline. The bill takes a step further than the “New York City Climate Protection Act” which required a 30 percent reduction by 2030.

It’s all part of the City Council agenda to fight climate change, announced in September just a week ahead of the United Nations’ Climate Summit.

“We have a moral responsibility” to prevent further climate change, said Speaker Melissa Mark-Viverito, who believes that New Yorkers can turn things around.

“While rising seas and extreme weather events are likely to be part of New York City’s future, we can still prevent the worst outcomes,” said Mark-Viverito.

Constantinides said that the city should lead on environmental issues, in addition to the host of others it already sets the curve for, such as in public health and housing.

The large metal bins that sometimes obstruct pedestrian traffic collect clothing for donations—but it is unclear to officials just who gets the clothes.

Brooklyn Councilwoman Inez Barron said Thursday at City Hall that the clothing might even be sold overseas for money.

In any case, regardless of who the clothes go to, “illegally placed collection bins are a nuisance, an eyesore, and blight,” said Mark-Viverito.

The bill passed by Council Thursday will give sanitation officials authority to immediately remove the bins, without having to first wait 30 days.

Prior to the bill, officials could only slap yellow stickers on the bins to warn the owners, but the latter would just move the bins to different locations to avoid receiving violations.

The bill also fines the people bringing the bins to the streets—$250 for the first violation, and $500 for each additional offense. Fines are doubled if the bins are placed on city property.

Many apartments in the city lay in disrepair because the landlords are trying to get rid of their rent-stabilized tenants, according to Brooklyn Council member Antonio Reynoso.

Once tenants flee from the terrible living conditions, landlords can then proceed to charge new tenants higher rents at unregulated rates.

The City Council approved a bill that would expand a current program to repair such buildings and charge landlords for the work done.

Housing officials are already allowed to go in and repair 200 of the most distressed residential buildings, but the new bill will let them fix an additional 50 more buildings.

Reynoso, a key sponsor of the bill, said the legislation would result in “increased accountability for deadbeat landlords and improve quality of life for tenants.”

The bill will take effect in May 2015, if the mayor signs his approval.

Manhattan Council member Dan Garodnick called the repair program one of the city’s “most recent success stories” but that “it has been limited by law.”

Another approved bill will charge landlords who violate the housing code repeatedly for the inspection fees.

If tenants complain two or more times within a twelve-month period, and there are inspections due to that, landlords will be billed $200 for each subsequent inspection.

The fine rate can escalate depending on the magnitude of the violations.

Landlords would not have to pay in the event that the inspection doesn’t turn up any violations.