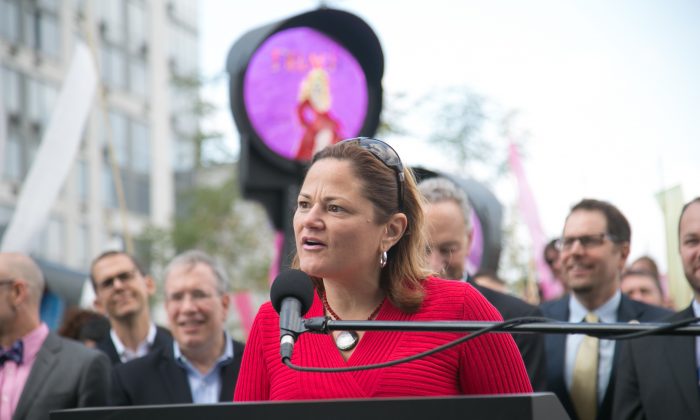 Speaker of the New York City Council Melissa Mark-Viverito attends High Line At The Rail Yards Dedication And Opening Ceremony at Highline in New York City on Sept. 20, 2014. She announced a bill Thursday that she will introduce on Oct. 7, under which New York will no longer honor Immigration and Customs Enforcement requests for detainment of illegal immigrants without a warrant from a federal judge. (Jason Carter Rinaldi/Getty Images)
New York

Illegal immigrants in New York could now enjoy safety from federal detainment orders, which the city could refuse to honor without a federal judge’s warrant, in new legislation proposed by City Council members, which the mayor supports.

And even with a warrant, the suspect must be convicted of a violent or serious crime for police to detain him or her. The bill also asks the U.S. Immigration and Customs Enforcement (ICE) to close its offices on Riker’s Island and leave.

“By further limiting ICE’s role in the detention and deportation of immigrant New Yorkers, we set the national standard for the treatment of our immigration population,” said City Council Speaker Melissa Mark-Viverito, one of the key backers of the bill, in a press release Thursday.

Rhode Island and Pennsylvania courts have already ruled earlier this year that immigration detainment orders were not enough probable cause to hold people in jail.

Their judges reached a conclusion similar to the one reached by Mark-Viverito’s office—since federal government detainer requests are voluntary, those honoring them might find the blame falling on them for violating the U.S. Constitution.

Dan Cadman, a former ICE employee, said he had heard of two such cases.

In one, an American citizen was mistakenly detained under ICE’s request. The second involved a county jail holding a person for over 48 hours.

For the first case, Cadman said, “ICE didn’t do its job. It should have been taken to the work shed on it. And those who honored ICE should have received immunity.”

Cadman is now a fellow for the Center for Immigration Studies, a conservative think tank in Washington, D.C., that supports stronger immigration control.

He said of the proposed bill, “It’s going to result in a significant number of individuals who are known troublemakers or criminals being released back to the streets before ICE can get their hands on them.”

New York City officials have done much for its immigrants, sending out education and health officials into immigration courts to advise migrant children on opportunities, and issuing municipal IDs.

According to Council member Rafael Espinal, the proposed bill has been a long time coming.

“For years, I have witnessed ICE set up shop in our city’s jails to prey on vulnerable immigrant inmates, who have served their time, and expedite them into federal detention centers,” said Espinal, “The victims are separated from their families and often times transported to states like Texas and Louisiana, without due process of the law.”