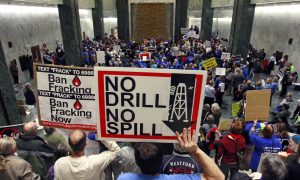 One of the bills is Public Advocate Letitia James’ proposal to create a police task force that wears body cameras.

Another would require police to post quarterly reports on its website regarding chokeholds and “seat belt holds,” which involve wrapping the arms around a person’s shoulder and armpit forcefully.

The third bill would require police to issue quarterly reports on the use of force and whether the police force affects people’s quality of life in a damaging way.

Several council members participated in a prayer march Tuesday night in City Hall with clergy and activists to honor the death of Eric Garner, a black man who died after being placed in a chokehold by a white police officer in Staten Island.

Other bills, introduced last month, include one that would ban the chokehold and another that would require police to ask permission before searching suspects.

In response to police union head Pat Lynch’s comments that Mark-Viverito and the mayor should stay away from police funerals, she called it a “very, very irresponsible message to be sending.”

CORRECTION: A previous version of this story incorrectly spelled the name of a City Council member. The correct spelling is Jumaane Williams. Epoch Times regrets the error.