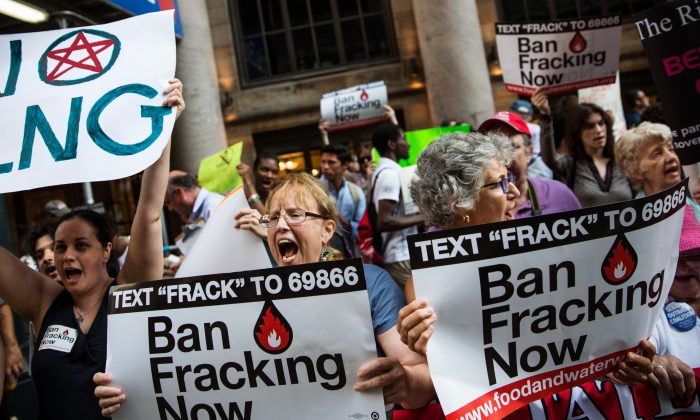 Protesters demand a statewide ban on fracking outside of a Manhattan hotel where Gov. Cuomo was attending a Democratic Party event in New York on June 30, 2014. (Andrew Burton/Getty Images)
New York

City Council Moves to Ban Waste From Fracking in NYC

NEW YORK—An anti-fracking bill was introduced to the New York City Council on Thursday, banning the “discharge, disposal, sale or use” of waste resulting from drilling natural gas with hydraulic fracturing, commonly known as “fracking.”

Councilmembers Stephen Levin and Corey Johnson, the sponsors of the bill, argue that the chemicals involved in processing fracking waste are a public health concern and a threat to the environment.

“Hydrofracking waste is highly toxic and doesn’t belong in any of the five boroughs,” Levin said in a statement. “With this legislation we can keep this toxic waste out of New York City and send a clear message that we are opposed to fracking in our state.”

The state legislature has been hesitant to curb fracking in the state of New York, and Gov. Cuomo has been reticent on the subject, to the chagrin of many environmentalists.

“While hydro-fracking should be banned outright in New York State, it is important to put protections in place while the process is still in legal limbo,” Johnson said in a statement.

The bill would prevent the city’s 14 water-treatment plants and various private plants from treating water waste generated by fracking.

The proposal comes on the heels of a pattern of municipal action statewide that seeks to limit fracking through indirect means, as they lack the legal authority to ban it outright.

For instance, in 2011, the upstate towns of Dryden and Middlefield forbid fracking operations in their towns by way of zoning ordinances, which prompted lawsuits from natural gas companies, arguing that the state’s constitution forbid towns from regulating the “details, procedures, or operations” of the oil and gas industry.

The case was fought all the way to the state’s Court of Appeals, which ruled against the natural gas companies in July of this year, saying that the towns were acting within municipal powers to pass zoning regulations to exclude fracking.

The court’s decision validated the implicit fracking bans in more than 170 municipalities in New York, and more than a dozen counties have passed regulations for fracking waste. However, environmental activists argue that a statewide ban is needed.