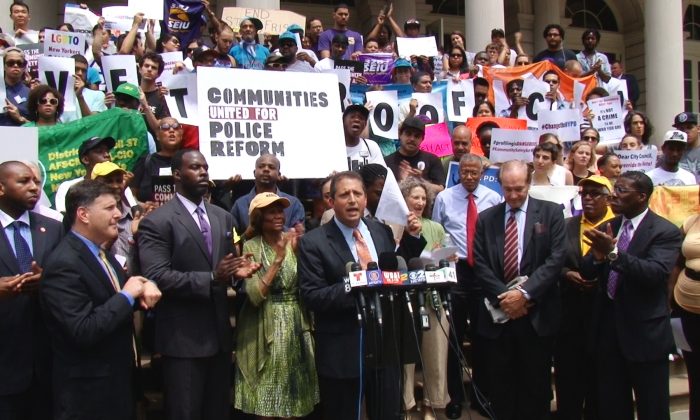 NEW YORK—Calling themselves the “proud 34,” some of the 34 city council members who voted for a controversial stop-and-frisk bill, part of the Community Safety Act (CSA), have vowed to override a mayoral veto of the bills. Bloomberg vetoed the bills yesterday, July 23.

At a public rally on the City Hall steps, City Council members said repeatedly that they would “not be moved,” referring to the pressure many have been under to switch their votes. If one of the 34 council members changes his or her vote, the mayor’s veto will stand.

Advocates and a majority of Council had fought hard for months to bring a vote on the CSA bills, in the end using an unprecedented maneuver to orchestrate what resulted in just enough (34) to win a veto-proof majority.

Council members at the rally included Jumaane Williams and Brad Landers (co-sponsors of the CSA), Mark Weprin, Jimmy Van Bramer, Gail Brewer, Donovan Richards, Debbie Rose, Danny Drum, Steve Levin, and Andy King. They were joined by a number of advocacy organizations, including the NYCLU and the NAACP.

One by one, council members who signed the original bills chastised Bloomberg for the veto. The CSA would create an NYPD monitor under the mayor and give those subjected to stop-and-frisk a chance to go to court for injunctive or declaratory damages, but no financial damages.

“This is an important moment for New York City,” said Council Member Steve Levin. “I’m not going to change my vote.” By law, the vote must be cast sometime between now and August 24.