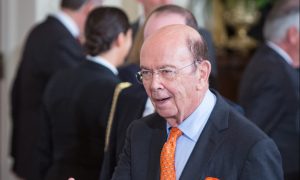 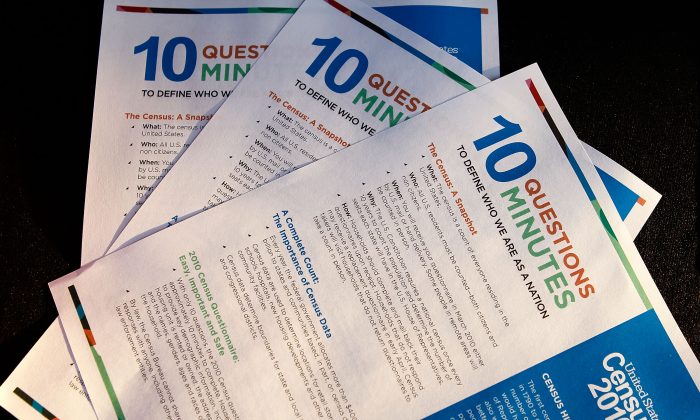 Forms for Census 2010 are displayed in Washington on April 1, 2010. The census is conducted every 10 years. (Alex Wong/Getty Images)
US News

A federal judge has rejected an activist group’s request to prevent the Trump administration from asking 2020 Census respondents if they are U.S. citizens.

In recent decades, Democrats and Republicans have fought bitterly over how the decennial, constitutionally mandated head count is carried out.

The Obama administration tried to wrest control over the census from the U.S. Department of Commerce but backed down. At the time, then-Rep. Darrell Issa (R-Calif.) called the move a “naked political power grab.”

The Clinton administration wanted to use statistical modeling or sampling to produce census figures, but that move was ruled unconstitutional in 1999 by the Supreme Court. The Republicans of the day said Democrats were trying to inflate the count in their big-city strongholds to manipulate the congressional apportionment process to benefit their side.

The legal victory for the Trump administration came Feb. 8, when Judge Dabney Friedrich of the U.S. District Court for the District of Columbia threw out an application for a preliminary injunction filed by the Electronic Privacy Information Center.

The group argued that the government should have conducted a privacy impact assessment (PIA) before adding the citizenship question.

The court disagreed. The U.S. Census Bureau did not violate the law when it decided “to collect citizenship data before conducting, reviewing, or releasing a PIA addressing that decision,” Friedrich wrote in her ruling.

The Electronic Privacy Information Center vowed to move forward with its lawsuit, despite the setback. The lawsuit is one of about a half-dozen challenging the Trump administration’s plans for next year’s census. In New York, a federal judge ordered the citizenship question be taken out of the census. That case is expected to be heard by the Supreme Court.

Commerce Secretary Wilbur Ross is expected to testify before Congress in March about how he decided to include the question. Ross said the Department of Justice asked for the question to be added, but Democrats say emails showed he discussed the issue with White House officials before that.

The Commerce Department, which houses the Census Bureau, announced the inclusion of a citizenship question in the upcoming census last year. One of the reasons given for adding the question, which until the 1950s was a staple of the census, was to help identify possible violations of the Voting Rights Act.

More recently, the question has been included in the smaller, more detailed study, the Census Bureau’s annual American Community Survey, which is sent to about 3.5 million households annually.

Hans von Spakovsky, a senior legal fellow at the Heritage Foundation, has applauded the addition of the citizenship question. “The public has a right to expect that the government will do everything in its power to get as accurate a picture as possible of the American body politic,” he said.

But last year, Democratic politicians vehemently denounced putting the question in the census, accusing the Trump administration of having sinister ulterior motives.

Chair of the Democratic National Committee Tom Perez said the move was “a craven attack on our democracy and a transparent attempt to intimidate immigrant communities.” The census is not supposed to be “a political tool for Donald Trump to push his agenda and disempower Latinos and other people of color.”

Perez said restoring the citizenship question stokes “fear” that makes immigrant communities “invisible.” In reality, they are “guaranteeing an inaccurate count that lays the groundwork for sustained racial gerrymandering and jeopardizes critical resources for communities across the country.”

Timothy Olson, associate director for field operations at the U.S. Census Bureau, said he hopes the legal dispute is resolved soon because his agency faces a “hard deadline in June” for finalizing the questions that will be printed on the questionnaires.

“We will conduct the census with or without the citizenship question,” Olson said, according to the Albuquerque Journal.

“My job, and all of my peers’ job, is to make sure the census is as accurate as possible. We’re just waiting for a final decision to go to print. If the decision is delayed, that presents new challenges for us. We’re hopeful that firm direction will be provided, so we know which version to print.”

Olson said more than $675 billion in federal funding is at stake. That money is allocated to states, counties, cities, and Indian tribes each year, according to census findings.