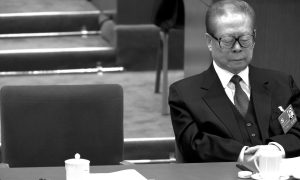 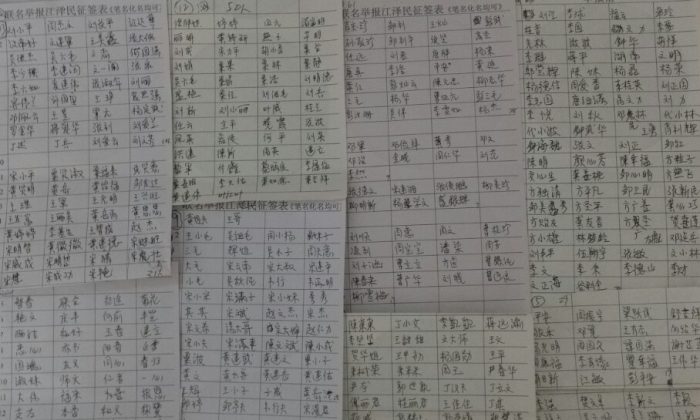 The picture shows some signatures collected in a campaign to sue the former Chinese leader. (Minghui.org)
China

Over 1,500 Chinese citizens from the central China province of Hunan have recently signed their names in support of a campaign to lodge criminal complaints against Jiang Zemin, a former Chinese Communist Party leader, for his role in launching the persecution of Falun Gong.

The signatures were collected by practitioners of the suppressed traditional spiritual discipline, beginning on Sept. 28 in the Hunan city of Changsha. In about a month, they had amassed 1,577 signatures. Minghui.org, a website that tracks the persecution of Falun Gong, reported the story.

The Changsha residents who joined the signature drive expressed a similar sentiment: Jiang Zemin should have been brought to justice a long time ago.

“Corruption, lies, gangs, promiscuity… look how much he has ruined society,” said Wang Min (an alias), one of the signature campaign’s participants. “No one dares to help the elderly who fall, tainted powdered milk, gutter oil…” he said, listing contemporary social maladies in China. “This scum has done nothing good.”

An older person said: “When they arrest Jiang Zemin, let’s together set off firecrackers,” according to Minghui.

A grandmother Zhou said: “I’ll sign, to return justice to Falun Gong.” She said that before the persecution, both her and her husband practiced Falun Gong, and that as a result his health improved remarkably. “After the persecution started, officials from his work unit and the neighborhood committee visited us very often,” she said with a sigh. “If there was no persecution, my husband would not have died so early! I witnessed how Falun Gong helped to recover our morale and health, and brought great benefits to society,” she said.

Falun Gong practitioners first started filing criminal complaints calling for Jiang Zemin to be put on trial for genocide and crimes against humanity at the end of May. The complaints are submitted to the Chinese regime’s highest court and prosecuting body.

After the Supreme People’s Court and Supreme People’s Procuratorate accepted them—a legal reform on May 1 required all complaints to be accepted and acknowledged—a wave of complaints by mainly Falun Gong practitioners were mailed in from all over China. As many as 190,000 Falun Gong practitioners have filed criminal charges, according to the latest data from Minghui on Oct. 27.

A handful of Falun Gong practitioners have been targeted for submitting their complaints. Most notably, Sheng Xiaoyun, the mother-in-law of Youtube celebrity and television journalist Ben Hedges, was arrested on Oct. 21 by public security forces in Heilongjiang. Sheng was released on Oct. 31.