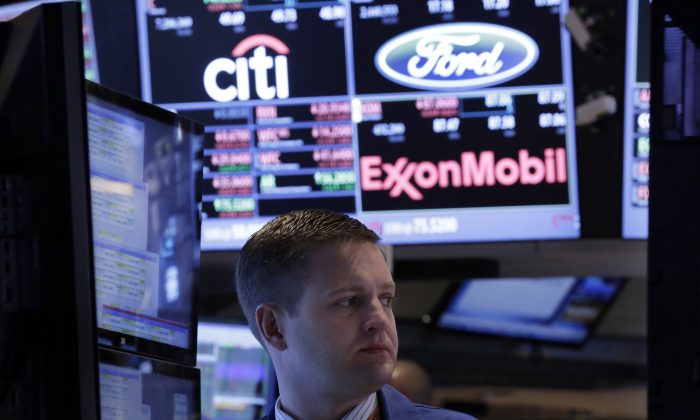 NEW YORK—Citigroup said its earnings fell slightly in the third quarter after a $1 billion drop in revenue from its bond trading business and a slump in mortgage refinancing.

Net income for the July-to-August period fell to $3.26 billion from $3.27 billion in the same period a year ago after excluding an accounting gain and other one-time items. The earnings amount to $1.02 per share compared with $1.06 per share last year. Analysts expected $1.04.

Earnings were further boosted by a reduction in the amount of money the bank holds in reserve for bad loans. Banks can almost change this number at will. If they increase the reserve, earnings go down, but conversely they have a buffer if loans go bad. If the lending environment improves, banks can release money from the reserve, which benefits earnings. Citi did this amounting to a gain of $675 million.

The rising rates also hurt Citi’s securities and banking unit. Revenues at Citi’s bond trading unit slumped 26 percent in the third quarter, to $2.8 billion from $3.7 billion as bond yields climbed. Rates rose in anticipation that the Federal Reserve would start reducing the bond purchases that has been making to stimulate the economy. Citi said that “performance [was] impacted by the macro environment, especially in fixed income.”

Market Reaction
Citigroup’s stock closed down 74 cents to $48.86, near the lows of the day. At the end,it was not enough that the bank managed to increase its capital ratios and the market sold off the stock. The most commonly used Tier 1 capital ratio stood at 10.4 percent.

Citigroup remains “hopeful” that lawmakers in Washington will be able to avert a potential U.S. default, said John Gerspach, Citi’s Chief Financial Officer, on a call with reporters. The bank has been preparing for different contingencies over recent weeks and no longer holds any U.S. Treasury securities that mature on the Oct. 31, or earlier, the executive said.