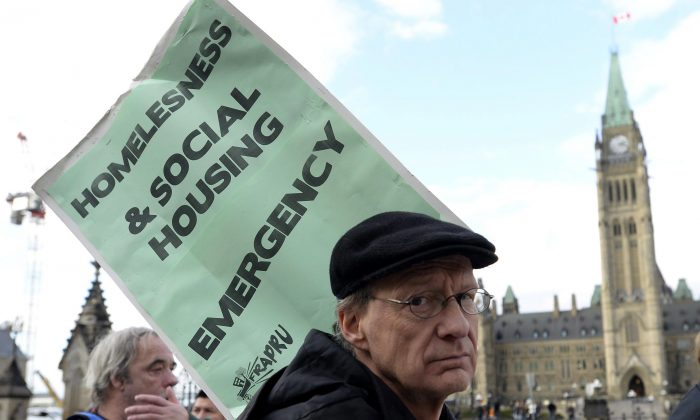 Demonstrators takes part in a protest for action on social housing and homelessness on Canadian Housing Day on Parliament Hill, Nov. 20, 2015. The government is moving ahead this month with a nationally co-ordinated count of homeless people, but cities are worried that the timing will lead to inaccurate results. (The Canadian Press/Justin Tang)
Canada

OTTAWA—The federal government is moving ahead this month with a nationally co-ordinated count of homeless people across Canada, despite opposition from cities worried that the timing would lead to inaccurate results.

The newly launched national point-in-time count marks the first time the federal government has tried to co-ordinate what has largely been a municipally driven project in some parts of the country like Toronto and Vancouver.

Many cities have never done a point-in-time count; those that do, use different methodologies making it difficult to compare results on a national scale.

The federal government had wanted to gather details on the size and makeup of the homeless population strictly in January, but faced stiff criticism when it disclosed the plan to representatives from 49 communities at a national meeting in May 2015.

January is when the U.S. government requires point-in-time counts for cities that receive federal funding to help with costs.

“There was universal support for a co-ordinated, national point-in-time count. It’s not like people didn’t want to do it,” said Tim Richter, president of the Canadian Alliance to End Homelessness.

“The opposition was more about when, and [whether] we have enough time to organize it.”

Many cities have never done a point-in-time count; those that do, use different methodologies making it difficult to compare results on a national scale.

Cities complained they wouldn’t have enough time to get all the resources in place to count every homeless person in a city, town, or region during one 24-hour period. Some cities, like Toronto or Vancouver, spend more than a year planning a point-in-time count—much longer than the seven months the federal government was giving municipalities back in May.

City officials also expressed concerns that a homeless count in January would skew results as the cold weather would drive more people indoors and obscure the true number of homeless people in a community.

January is a peak month for “hidden homelessness, as people seek any shelter from the extreme weather,” reads a May 13, 2015, briefing note to Conservative MP Candice Bergen, who was then the minister of state for social development. The document was obtained by The Canadian Press under the Access to Information Act.

There were also concerns expressed that a January count would “undercount” women and children “who may opt for unsafe shelter options or trading sex for housing rather than sleeping outside.”

The government has since extended the time frame, giving the 30 communities taking part in the federal initiative between now and the end of April to collect data on the size and makeup of the homeless population during one 24-hour period.

Employment and Social Development Canada, which oversees the count, hadn’t responded by the evening of Dec. 5 to questions about the change and details of the count itself.

The point-in-time count won’t capture everyone who experiences homelessness no matter what season it happens, but the data collected should help local governments plan social services and see what is working, what isn’t, and what services are still needed, said Stephen Gaetz, director of the Canadian Observatory on Homelessness and a professor of education at York University in Toronto.

“All these things are linked, so that data will be important,” he said.

“And over time … they’ll be able to actually see and measure whether their investment is producing the results that they hoped for. That should lead to better solutions.”