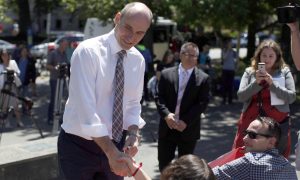 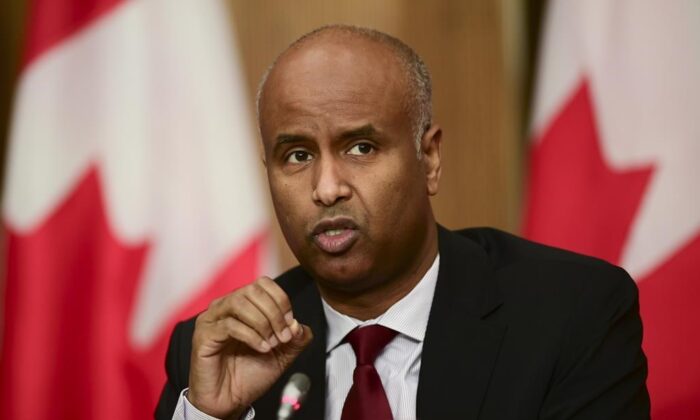 Minister of Families, Children and Social Development Ahmed Hussen takes part in an update on the COVID pandemic during a press conference in Ottawa on Oct. 27, 2020. (The Canadian Press/Sean Kilpatrick)
Canada

OTTAWA—The federal minister in charge of affordable housing says he would like municipalities to reshape local rules to more quickly build units through the government’s national housing strategy.

Social Development Minister Ahmed Hussen says some cities and towns have already started to align their permitting and planning process with the federal strategy, but adds many have not.

He says it would be key to boosting the supply of housing and rental units that should ease costs fuelled by rising demand.

In an interview with The Canadian Press, Hussen says he’s particularly concerned cities aren’t doing enough to add units in the areas between the suburbs and downtown cores in a process known as intensification.

Hussen and Finance Minister Chrystia Freeland earlier this week met with experts about the country’s hot housing market, which has made it more difficult for some to buy alongside limited options for rental units.

“They can improve the permitting and planning process to better align with the national housing strategy requirements so that affordable housing is built faster. I’ve achieved that with a number of municipalities, but not all of them, so there is a lot of potential.”

The cost of housing has risen across the country over the last year, driven by a mix of low interest rates, demand outstripping supply as Canadians working from home look for more space, and recently rising costs for materials like lumber.

April’s federal budget proposed billions in new spending to boost the supply of affordable housing, seeing it as a way to bring down overall prices, and proposed a one percent tax on vacant homes owned by foreign buyers to dampen speculation and force owners to start renting out properties.

Weeks later, the Liberals tightened the stress test for insured mortgages to match a similar move by a federal banking regulator for uninsured mortgages after the central bank warned that households were piling on too much debt.

Speaking to a Senate committee Wednesday night, Bank of Canada governor Tiff Macklem said there were some early signs of some cooling, adding that he expected further easing as the supply of units grew and demand slowed.

A report this month from Desjardins economists forecasted the housing market should stabilize over the summer as lockdowns lift, but warned of ongoing risks, including that the market could overcorrect in the coming quarters.

“We need to be thinking about and developing some contingency plans and possible things we could do, if there is more to be done,” Macklem told senators on Wednesday night.

“We are starting to see some moderation in housing, and I would give it a little time before doing anything else.”

The overall situation has spurred a coalition of homeless and housing advocates to launch the “Vote Housing” campaign that will target 70 key federal ridings, urging voters to pressure candidates to commit to addressing housing need and homelessness in Canada.

Alex Nelson with the Canadian Lived Experience Leadership Network will be involved, leaning on their experience of living in shelters, hotels, motels, and couchsurfing during their youth.

Nelson said the lived experience they and others bring to the campaign should have a greater impact, noting that about one−third of Canadians have experienced homelessness or know someone who has.

“We have the opportunity as people with lived experience to go out—as the voting public as rights holders—and assert that we can make or break this election, that we can bring housing into the public consciousness and make it part of the public conversation as we lead up to the election.”