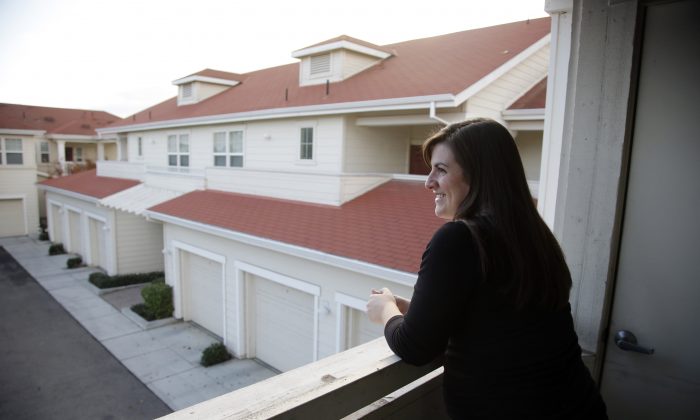 Katy Howser, a kindergarten teacher in the Santa Clara School District, looks out from the balcony of her apartment at Casa Del Maestro, an apartment complex for teachers, in Santa Clara, Calif., Dec. 11, 2015. School districts in high cost-of-living areas and rural communities that have long struggled to staff classrooms are considering buying or building rent-subsidized apartments as a way to attract and retain teachers amid concerns of a looming shortage. (AP Photo/Marcio Jose Sanchez)
US

SAN FRANCISCO—As the days get shorter, first grade teacher Esmeralda Jiménez watches the dimming afternoon sky outside her classroom window the way her pupils watch the clock at dismissal time.

The studio apartment Jiménez rents for $1,783 a month, or 43 percent of her salary, is located in one of San Francisco’s sketchiest neighborhoods. Getting home involves running a gauntlet of feces-strewn sidewalks, popping crack pipes, discarded needles and menacing comments—daily irritants that become more daunting after dark.

“If I lived in a better area, I wouldn’t feel so scared going home and I would be able to stay at school a little longer,” Jiménez, 26, said. “You have so many things to do to prep for the next day, but it’s gotten to the point where even if I leave at a decent time I will walk three blocks out of my way to avoid some streets.”

It’s a scenario that has Jiménez wondering if she should find a profession that pays more, and public officials here and in other cities looking at housing as a tool to prevent the exodus of young educators like her.

Inspired by the success in the heart of the Silicon Valley of a 70-unit teachers-only apartment complex, school districts in high cost-of-living areas and rural communities that have long struggled to staff classrooms are considering buying or building rent-subsidized apartments as a way to attract and retain teachers amid concerns of a looming shortage.

Housing costs especially have become a point of friction for teachers in expensive cities such as Seattle, where teachers who went on a one-week strike in September said they could not afford to live in the same city as the children they teach.

In San Francisco, where many of Jiménez’s colleagues have roommates or long commutes, addressing the affordability crisis for teachers was one of the main selling points of a housing bond voters approved in November, the first to pass in a generation.

About $35 million of the $310 million to be raised has been earmarked for construction of up to 100 new apartments on surplus land owned by the San Francisco Unified School District. The units would be rented at below-market rates to the district’s 3,500 teachers and 1,600 classroom aides, who also would be eligible for new rental housing allowances and home down payment loans aimed at reducing living costs for another 300 educators, Deputy Superintendent Nyong Leigh said.

“Each one of these ideas would reach some modest number, but in aggregate it would hopefully make a difference,” Leigh said.

The district hopes to acquire 15 to 20 apartments in each of the three towns, enough to house at least 10 percent of its 450 teachers, Assistant Superintendent Shannon Pelland said. In an area where the average home sells for $630,000 and the average teacher makes $47,000, housing costs are “without a doubt the number one reason we lose teachers and it’s the number one reason people turn down jobs,” Pelland said.

“Our typical pattern with teachers is they come to the valley, it’s an absolutely beautiful place, it’s a great lifestyle with wonderful recreational opportunities, and they are willing to live with roommates and do whatever they have to do to make it work for four or five years,” she said. “And right at that 5-year mark we see a lot of them saying, ‘This is great for a while, but I’ll never be able to afford a home here or make it work here, I’m moving on.'”

School districts in Oakland, Milwaukee, Odessa, Texas, and Asheville, North Carolina, also have apartment projects for teachers in the works. The Los Angeles Unified School District this year opened its first apartment complex on school grounds for district employees and has two more under construction.

Stockton Williams, executive director of the Urban Land Institute’s Terwilliger Center for Housing, said the concern over teachers being priced out of the communities they serve reflects an inadequate supply of new rental housing designed for middle-income workers instead of the high end of the market.

“It’s not just a San Francisco-New York-Seattle story. It’s in many cities, large and small, and in most parts of the country,” Williams said.

Officials in Santa Clara, California, found a workable formula more than a decade ago that other school districts in the San Francisco Bay Area and beyond still are trying to replicate. Working with a private developer under a tax-exempt financing scheme, the school district built 70 apartments between 2002 and 2009 that collectively are known as Casa del Maestros, Spanish for “house of the teachers.”

When kindergarten teacher Katy Howser moved into a one-bedroom apartment there 6 ½ years ago, she was a 23-year-old living with her parents while she paid off her student college loans and credit card debt. The teachers-only complex was all she could afford, but having other educators as neighbors turned out to be more than a financial advantage.

“Everyone has the same common courtesy for each other,” Howser said. “There are technically quiet hours, but it’s not ever really loud. Everyone just wants to come home and be quiet because we have to be loud all day.”

Now married and expecting her first child, Howser and her husband pay $1,700 a month for a two-bedroom apartment, at least $1,000 less than for a comparable place in the area. They will have to move out in June because tenants can only stay for seven years. Howser hopes they will have saved enough for a down payment on a house by then.