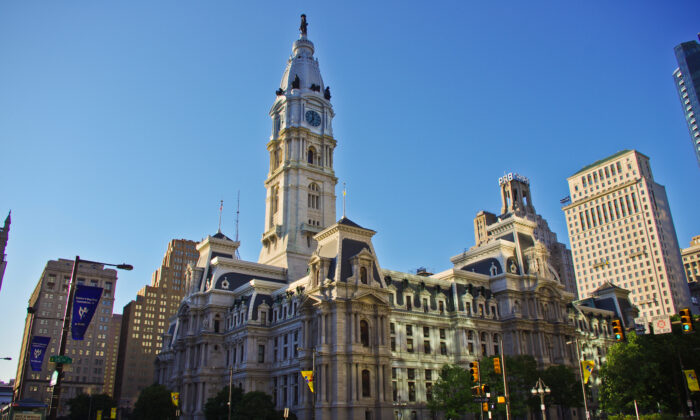 The city of Philadelphia raised the Chinese flag outside City Hall on Oct. 1, the day marking 70 years of Communist Party rule in China, despite strong opposition from local community groups.

The flag was raised during a morning ceremony at the Philadelphia City Hall to “celebrate pride in the local Chinese-American community,” according to an emailed statement from the mayor’s office.

But local groups have objected to the event, saying it amounted to honoring 70 years of repressive rule under the Chinese Communist Party—a regime that has killed tens of millions of its own citizens, more than any other in modern history.

“Raising this flag, a symbol of the birth of the Chinese Communist Party on October 1, 1949 is only celebrating tyranny, repression, and death,” Jessica Russo, mental health advisor at advocacy group Doctors Against Forced Organ Harvesting (DAFOH) said in a Sept. 20 email she drafted to the mayor’s office and provided to The Epoch Times.

The regime also continues to persecute religious groups, including Falun Gong (also known as Falun Dafa) practitioners, Uyghur Muslims, House Christians, and Tibetan Buddhists, Russo wrote in a Sept. 17 letter to the city, adding that the Party has killed prisoners of conscience for their organs. DAFOH is a non profit that raises awareness about organ harvesting in China, a practice which an independent tribunal in June found has taken place for years “on a significant scale.”

“In 1989, the Chinese Communist Party shot innocent, unarmed students on Tiananmen Square. Would Philadelphia have raised the flag after this atrocity?” Russo wrote in the letter.

The letter also referred to the ongoing mass protests in Hong Kong against the Chinese regime’s encroachment into the city’s autonomy, and posed the hypothetical: “How would the city of Philadelphia explain its actions if after the flag raising ceremony, maybe days or weeks later, those Hong Kong students were shot?”

Russo told The Epoch Times she found it tragically ironic that a young Hong Kong protester had indeed been shot on the very day of the flag raising. The incident occurred during clashes between Hong Kong police and demonstrators on the regime’s founding anniversary, dubbed by protesters as “A Day of Grief.”

“When a city like Philadelphia supports this dictatorship, it only serves to embolden their repressive actions,” she said.

The mayor’s office said in an emailed statement that a local community group, the Pennsylvania United Chinese Coalition, applied for the ceremony as part of the city’s “City Hall Honors Diversity” program, which allows local groups to organize flag raisings.

The statement said that while the City acknowledged concerns by local groups, “the flag raisings are not a sign of support for any specific government, political party, or movement.”

“Rather, they are an opportunity … for people with shared heritage to celebrate their backgrounds and experiences.”

Russo said there were many ways to celebrate Chinese culture and people, without paying tribute to the Chinese Communist Party on the day its flag was first raised in China.

Philadelphia is not the only American city to have hosted a flag raising event in time for the Chinese regime’s anniversary.

The flag was hoisted at Boston’s City Hall Plaza on Sept. 29 in advance of the anniversary. The event was sponsored by the Chinese Progressive Association of Boston and attended by City Counsellor Ed Flynn.

A group of people, including Falun Gong practitioners, Hong Kong students, and members of the Tibetan community, protested the event.

The City of San Francisco on Sept. 27 held a flag-raising ceremony to mark the regime’s 70th founding anniversary, according to Chinese state-run media Xinhua. San Francisco has flown the Chinese flag every year for decades, as part of its tradition to fly flags of countries with consulates in the city to mark their national holidays.

Local groups and other citizens also boycotted the event, the Toronto Sun reported.