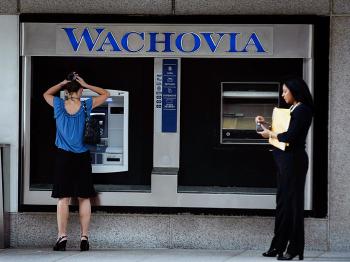 On Monday, Citigroup Inc. agreed to purchase Wachovia’s banking operations and assets in an all stock deal valued at $2.16 billion, or about $1 per share.

Citigroup will assume most of Wachovia’s assets and liabilities, including all of its debts. The bank announced subsequent to the purchase that it would raise $10 billion in additional capital and cut its dividend in half.

"For Wachovia customers, today's action will ensure seamless continuity of service from their bank and full protection for all of their deposits." said FDIC Chairman Sheila C. Bair. "There will be no interruption in services and bank customers should expect business as usual."

Charlotte, N.C.-based Wachovia was the sixth-largest U.S. bank by assets. The deal gives Citigroup control of all of Wachovia’s five depository institutions and “the bulk” of its assets, the FDIC said. AG Edwards and Evergreen Investments were not part of the deal.

At deal time, Wachovia held $312 billion in mortgage loans, and the FDIC may be on the hook for some of the losses. Under the agreement, Citigroup will absorb up to $42 billion in losses from Wachovia, with the rest to be assumed by the FDIC. Citigroup issued $12 billion in preferred stock and warrants for the FDIC in compensation for bearing such risk.

Wachovia shares dipped below $1 after the announcement.

Wachovia owns the largest inventory of option-ARM mortgage loans among U.S. banks. Such loans give borrowers the option of skipping interest payments by adding the amount to the principle.

Wachovia paid $24 billion in 2006—the height of the real estate boom—to acquire Golden West Financial Corp., a California-based mortgage lender specializing in option-ARM loans. California was one of the worst-hit states in the subprime mortgage crisis.

The FDIC’s involvement attempts to assuage investor fears over the banking industry.

"On the whole, the commercial banking system in the United States remains well capitalized. This morning's decision was made under extraordinary circumstances with significant consultation among the regulators and Treasury," Bair said. "This action was necessary to maintain confidence in the banking industry given current financial market conditions."

The purchase solidified Citigroup’s position as the largest U.S. bank by assets. The current banking meltdown has benefitted the industry’s largest players—Citigroup, Bank of America, and JPMorgan Chase, which together account for around one-third of all U.S. deposits.