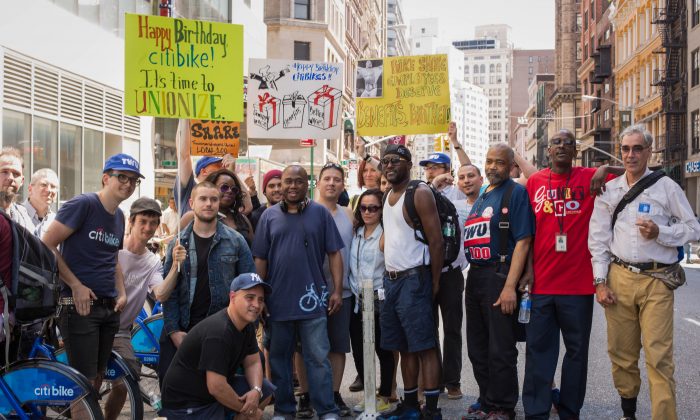 A crowd of Citi Bike workers rally at one of the docking stations in support of joining the Transportation Workers Union Local 100 in Union Square, Manhattan, on May 26, 2014. (Laura Cooksey/Epoch Times)
New York

In one year, Citi Bike has logged 8.75 million trips, 14.7 million miles, and cemented itself as a part of the city’s transportation network. But with the talk of expansion from City Council members came the revelation that the program is far from profiting. Advocates, officials, and now the workers themselves are asking for more transparency in management.

On Monday afternoon, as one of the Citi Bike shifts ended, a crowd of workers rallied at one of the docking stations south of Union Square in support of joining the Transportation Workers Union Local 100.

“They know what the problems are, they’re just not addressing them,” said Dolly Winter, a Citi Bike dispatcher who has been with the company since its launch in New York. Prior to that, Winter helped bring bike sharing to Washington, D.C., and spent three years with a company there until mismanagement drove her to work with bike share elsewhere.

Briton Malcomson has worked as a bike mechanic for seven years. He saw a job listing for NYC Bike Share on Craigslist while still living in Philadelphia, and thought why not apply?

Last January, he joined the company just in time to face the aftermath of Hurricane Sandy. “There were hundreds of bikes we needed to fix,” Malcomson said. And there still are, on a regular basis.

His position is necessary and thus fairly secure, but Malcomson said that’s not enough, especially if the company wants to grow. “We’re all here because we really love bike share. We’re all very dedicated to it being successful,” Malcomson said.

But the directions from management are not necessarily clear and have contributed to the faulty issues like broken bikes or docks that won’t dispense, workers said. The hope is that as a union, the workers can also push the parent company to be more organized.

As summer approaches, NYC Bike Share is hiring seasonal and part-time workers in many departments to prepare for higher ridership. And workers who have been with the company for a year or longer are worried about the lack of job security.

Many of the workers at the rally had been hired as full-time employees over a year ago, but after the busy summer came a cold weather lull and scores of workers were told they no longer needed to come in, according to Citi Bike workers.

“They say who gets the jobs is based on seniority and production but no one believes that,” said Edwin Aviles, a part-time driver for the company who also rebalances the docking stations. Over a year ago he joined as a full-time employee, and in October was called for an evaluation along with other members of the department. It was then they were told who would be staying and who would not.

“I’m seeing the same problems here as I did in D.C.,” Winter said of the way workers are managed. The parent company Alta will tell the local bike share company to do something, and their hands are tied, she said. This means frequent and sudden layoffs.

Winter tried to unionize the bike share workers in Washington but it did not happen and many, including Winter, got discouraged and left. She figured there would be more support for the movement in New York City.

Keandra Razor, who works in customer service, said as winter approached the employees in her department were asked to sign letters saying they would work part-time until the summer, where they would again become full-time employees. She’s received no response when inquiring about the letter.

Alta is trying to raise millions to expand the local bike share program, and has gained increasing criticism as the idea of public subsidies has been floated around.

The system has had a massive amount of technical hiccups since the start. It allows the most frequent users to pay the least, while its most lucrative user base, tourists, can be easily discouraged by a difficult-to-use system.

Some of its technical problems have been due to Sandy damaging millions in equipment and delaying the program’s launch. Other problems may be attributable to Montreal-based Bixi, which previously supplied Alta’s technology before going bankrupt and being switched out for 8D Technologies.

And it is difficult for Alta, which launched bike share programs in a variety of cities before New York, to use the excuse of inexperience, Winter said.

But if the company cannot afford to keep the full-time workers it hires and is planning to rely on more seasonal, part-time workers as it moves forward, it’s unlikely they will be able to afford the union contracts.

Alan Saly, director of publications at TWU Local 100, said the lobbying power of the 38,000-strong union could also help NYC Bike Share secure public subsidies, an idea city officials have referred to as a last resort.

Council member Ydanis Rodriguez, who chairs the transportation committee, will be meeting with the union leaders this week to discuss the program’s direction.

It’s been a monthlong process, but over half the Citi Bike workers have already signed authorization cards to show they want to be represented by TWU Local 100. Now they can ask the parent company Alta to voluntarily recognize the union and negotiate a contract.

“We see it as just another layer of public transit and important for mobility in the city,” said Tim Matthews, research director with TWU Local 100 and avid Citi Bike user.