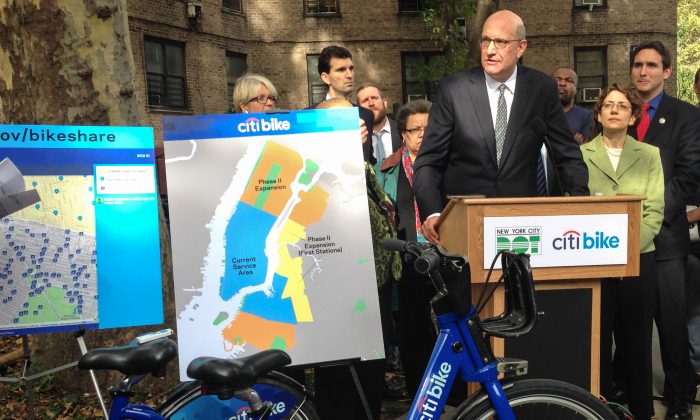 NEW YORK—Citi Bike will install new stations in the outer boroughs and double the number of bikes by 2017.

Annual fees will be hiked to $149 as part of a deal involving the takeover of the service’s parent company, Alta Bike Share, by private investors.

Jay Walder, who was installed as Alta’s CEO on Tuesday, said that the injection of new funds will allow Citi Bike to tackle a host of problems that have plagued the service since its launch in May of last year—a shortage of bikes, software glitches, and a deficit in capital worsened by falling sales of the more lucrative daily and weekly passes.

“We have a financial model and the commitment from the new owners to be able to invest in this system,” Walder said at a press conference in Queens. “Anyone who uses Citi Bike regularly knows that it should be more reliable, it should be easier to use.”

Walder previously headed the Metropolitan Transportation Authority before leaving in 2011.

He resigned as chief executive of MTR Corp, which operates Hong Kong’s rail system, after an internal investigation found that he was partially responsible for the 2-year delay in the construction of a high-speed rail from Hong Kong to Guangzhou, China.

Alta is being sold to BikeShare Holdings LLC, a newly formed venture helmed by the CEOs of Equinox and Related Companies, a real estate company, and Jonathan Schulhof, who had previously lost a bid to purchase a large supplier of bikes and docking stations for programs like Citi Bike.

Talks began early this year, and the majority of the terms had already been set by the past summer.

“We have worked hard these last 10 months to get Citi Bike on track for the long term,” said Polly Trottenberg, commissioner of the city’s Department of Transportation. As part of the deal, Alta’s headquarters will move from Portland, Ore., to New York City.

BikeShare Holdings will inject $30 million in funding for Citi Bike, which is also set to receive $15 million in loans from Goldman Sachs and an additional $70.5 million sponsorship from Citi Bank going through 2024.

The full details of the expansion are still in the works, and Walder said that “it’s the first day, we don’t have all the answers,” but 1,000 new bikes are expected by the end of 2015.

Alta also plans to hire a vice president of technology to address the technical hurdles that have bogged down the service.

Software glitches have made it routinely difficult to return bikes at docking stations, and a security breach from last year leaked the private financial information of more than a thousand Citi Bike users.

Walder said that every single bike in the system will undergo repairs this winter, and Trottenberg said that the repair of docks would begin “immediately.”

The location of the new stations will be determined with input from target communities. Over 400 meetings are planned with Community Boards, elected officials, and civic and property owner associations.

New Yorkers can use the “Suggest a Station” function on nyc.gov./bikeshare.

“The expansion will now serve transit-starved communities like Red Hook, Brooklyn where there is no direct subway service and only one bus route,” New York City Public Advocate Letitia James said in a statement. “Going forward, we must not forget to expand this great program into more neighborhoods in the outer boroughs.”

The new annual membership fee of $149 is nearly a 60 percent increase from the current $95 fee. Residents of the NYC Housing Authority and members of select Credit Unions can receive a discounted membership for $60 per year.

“This agreement to double the size of the bike share system will help Citi Bike begin to meet the demand we’ve seen coming from communities all over the city,” said Paul White, executive director of Transportation Alternatives, an environmental non-profit. “Keeping the $60-per-year affordability rate and introducing a new monthly membership will make the system more accessible.”

Citi Bike currently has over 90,000 annual members, and over 120,000 yearly passes have been sold since the program began, with most of the stations in lower Manhattan.

The new stations will be located in areas in Queens and Brooklyn adjacent to the East River by 2017. In the next wave of potential expansion, the network of stations will be installed further eastward into Brooklyn and Queens as well as the Bronx.

“It is certainly the goal of New York City that this eventually become a five-borough system,” Trottenberg said.