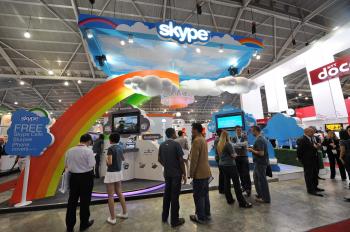 Trade visitors stand in front of the Skype booth at a CommunicAsia 2010 conference and exhibition. Making video calls from a mobile phone to TV sets or computers will be the next frontier for the telecoms industry, the head of internet telephony pioneer Skype said on June 15. (ROSLAN RAHMAN/AFP/Getty Images)
Business & Economy

TechCrunch reported on Monday that Cisco may make a bid prior to Skype's intended initial public offering (IPO), according to insider sources. No financial terms were revealed, but Skype itself may be looking to value the firm at around $5 billion.

Cisco's potential acquisition of Skype would expand its product line beyond networking, routing, and switches. But with Skype in the fold, the company may become a direct competitor to many of its clients, which are in the telecommunications and services industries.

Either way, Skype had intended to file for an IPO to raise capital. In its regulatory filing with the U.S. Securities and Exchange Commission, the company said that it has roughly 560 million registered users, of which 8.6 million pay the company for its long-distance and international calling features. That's a conversion rate of roughly 6 percent.

For the first half of 2010, the Luxembourg-based Skype earned $406 million in top-line revenues and $13 million in profits.

In November 2009, an investor group led by Silver Lake Partners, including the Canada Pension Plan Investment Board, acquired Skype from eBay Inc. EBay still retains a significant ownership stake in the firm.