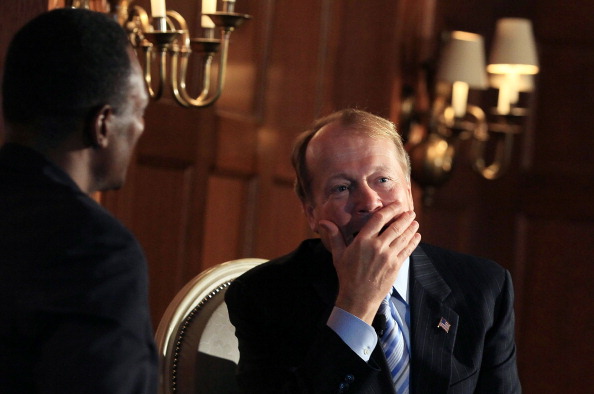 John Chambers (R), Cisco Systems Chairman of the Board and CEO, listens to a question from Dean Garfield, CEO of the Information Technology Industry Council, while participating in a "Visionary Series" discussion on October 19, 2010 in Washington, DC. The Association for Federal Information Resources Management (AFFIRM), hosted the discussion to bring together industry leaders for a dialogue on technology and its impact on the business of the federal government. (Mark Wilson/Getty Images)
US

When the state government of West Virginia ordered Cisco routers to upgrade their networks in 2010, they did not calculate that dealing with Cisco would lead them to losses in tune to $7.88 million. Apart from the fact that the secondary bid process was legally unauthorized (instead of competitive bid process as required by law), the West Virginia legislative auditor has uncovered that Cisco supplied equipment that are extremely high-end and not at all required for the current state of affairs. Moreover, Cisco sold the state another $6.6 million worth of services like upgraded software licenses and extra security features.

The router purchase was part of the Broadband Technology Opportunities Program (BTOP), which passed out several billion dollars to help upgrade broadband networks across America. The legislative auditor has also laid the blame on the Grant Implementation Team and the state Office of Technology who did not conduct a capacity or use study before spending $24 million from state reserves. These reserves were meant for laying fiber-optic cables for delivering internet to “Community Anchor Institutions (CAIs)” like libraries, school, hospitals and the police department.

Routers are categorized by levels, where level 1 is used in average homes and level 5 is used in the core of the Internet. Cisco 3945 routers come under level 3. According to the auditor’s report, “Level 2 routers would have allowed at least 368 West Virginia schools, which received the Cisco model 3945 routers, to meet the 2017 standards for broadband access..”

Some of the installations include the small town of Clay in West Virginia which has a population of only 491. Cisco has supplied them with 7 routers, costing more than $100,000. The city of Franklin in Pendleton County has received 6 total routers to serve a population of 721. Marmet, with a population of 1,500 has a small public library that only opens 3 days a week. They have one internet connection but they run this through a $15,000 – $20,000 Cisco 3945 router. The 3945 router is “ideal for mid-size to large deployments” according to Cisco but the libraries and even state police detachments and schools do not meet Cisco’s own criteria for mid-sized or large deployments. The up-gradation in the police department’s network itself cost an unnecessary $1.4 million. And all these routers were not even needed. Altogether, according to current estimates taken from schools, libraries and other institutions, the state could have saved at least $7.88 million.

Thirty-six schools in the state with an enrollment of 750 or more students did not receive a Cisco 3945 router. These were the places that could have most appropriately made use of the router.

First, by the state Office of Technology. They have claimed that the high-end routers would save money in the long run enabling users to use VoIP technology instead of the telephone lines. But the legislative auditor pointed out that while the purchased equipment could support up to 1.39 million VoIP lines, only a single library in West Virginia had more than eight phone lines and none use VoIP. Interestingly, none of the routers can be used for VoIP without installing additional equipment. The police department which has use of VoIP now needs to spend an additional $84,768 to purchase modules for enabling VoIP.

Mark Williamson, the CISCO engineer who prepared the outlandish proposal claimed to the auditor that he was simply following the state’s instruction, which required routers with “internal dual power supplies”. And the 3945 matched that requirement. But when the auditor investigated, he found out that the government departments had not made any such requests. The Department of Education told him that it “did not request or require that the routers for the state’s schools have internal dual power supplies. Education would not have made this requirement because unless a school has two power sources the feature of dual power supplies would have no use.” A network engineer for the Department of Education also confirmed that he had not requested such a feature. An employee at the state’s Office of Technology said that dual power supplies had come up, but only for “24/7/365 locations such as regional jails and DHHR state hospitals.” VoIP support was discussed “but not required,” he added, and he concluded by saying, “It was never implied to put each feature in all routers.” And when requested, Mr. Williamson could not provide any emails or other documentations to prove his claim.

Cisco countered the report saying that if the proposal was approved by the state, then they cannot be held responsible and maintained that the routers were large enough for future expansions.

The bidding process which “selected” Cisco was also controversial as other manufacturers like HP, Brocade, Juniper and Alcatel Lucent were not “given notice or any opportunity to bid.” “..instead of using an open competitive bid process to attempt to receive the lowest possible price and highest quality product, the State of West Virginia simply relied on Cisco’s goodwill.”

The legislative auditor concluded that Cisco “had a moral responsibility to propose a plan which reasonably complied with Cisco’s own engineering standards” but that instead “Cisco representatives showed a wanton indifference to the interests of the public in recommending using $24 million of public funds to purchase 1,164 Cisco model 3945 branch routers.”

Cisco told Ars Technica website, “the criticism of the State is misplaced and fails to recognize the forward-looking nature of their vision. The positive impact of broadband infrastructure on education, job creation, and economic development is well established, and we are committed to working with the State to realize these benefits for the people of West Virginia now and into the future.”

According to Ars Technica, getting any of the money back seems unlikely at this point, but the legislative auditor does have one solid recommendation to make. The State Purchasing division should determine whether Cisco’s actions in this matter fall afoul of section 5A-3-33d of the West Virginia Code, and whether the company should be barred from bidding on future projects.

Bloomberg has reported in 2011 that Cisco had accumulated $31.6 billion in overseas earnings on which it has paid no U.S. income taxes. Cisco has cut its income taxes by $7 billion since 2005 by booking roughly half its worldwide profits at a subsidiary at the foot of the Swiss Alps.

“Much of these earnings overseas are reaped from an enormous shell game: Firms move their taxable income from the U.S. and other major economies — where their customers and key employees are in reality located — to tax havens,” says Kleinbard, a former corporate tax attorney at Cleary Gottlieb Steen & Hamilton LLP.

Cisco uses a scheme called ’round-tripping’ wherein they transfer a portion of the patent rights to technology developed in the U.S. to a Dutch unit, which sells some of the resulting products back to its parent for eventual distribution in the U.S.

In 2012, California State University, the largest four year university in America, used a competitive bidding purchase to purchase an upgrade of existing networks to be used in all of its campuses. The networks were being run on Cisco till then. Bids came from Alcatel Lucent, Brocade, HP and Cisco. The director of Cyber Infrastructure of CSU provided documentation showing that Alcatel-Lucent won the project with a bid of $22 million. Cisco’s bid was $122.8 million.

Cisco was also involved in another controversy when a memo attributed to Mike Quinn, Cisco’s vice president of services threatened a whistle-blower for leaking Cisco’s internal email purporting the talking points to be used by Cisco sales staff for customers inquiring on the failed contract bid of California State University.