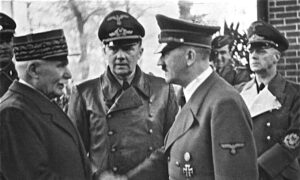 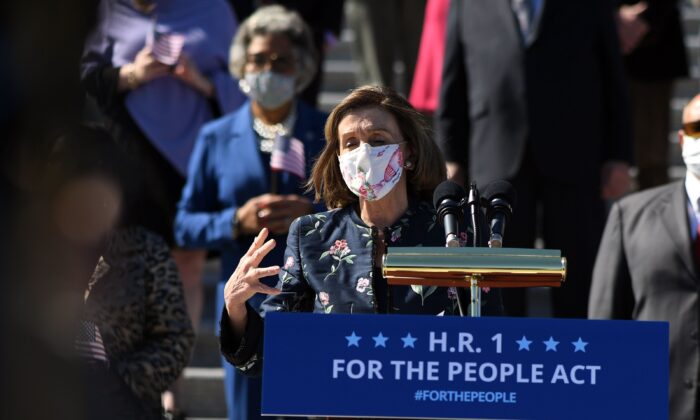 Speaker of the House Nancy Pelosi (D-Calif.) speaks at an event on the steps of the U.S. Capitol for the "For The People Act of 2021" in Washington on March 3, 2021. (Eric Baradat/AFP via Getty Images)
Viewpoints

Circling Back to the Pressing Choice of Government: ‘By the People’ or ‘For the People’?

Up until the 2020 election, the single-most-important democratic institution that Americans could depend on was the ballot box.

Despite the rhetorical fog, ideological deception, legal tergiversation, and corrupt policy, ordinary citizens have been able to throw out corrupt politicians and install leaders who promised to govern in the best interests of the American people.

As it stands now, this may no longer be the case, and the present transformation of U.S. electoral customs may well go down as one of the most troubling events in the history of democracy.

On Nov. 3, 2020, an enormously popular incumbent president, who polled close to 10 million more votes than he had won in his first election, was winning a landslide victory on election night. But, by the end of the week, hundreds of thousands of mail-in ballots appeared to swing the victory to his opponent.

When the counting finally came to an end, a cognitively declining Joe Biden, who had barely left his home to campaign, was credited with close to 80 million votes—supposedly making him the most popular presidential candidate in American history.

In hindsight, the measures taken to harvest and count mail-in ballots amounted to a thoroughgoing perversion of lawful election practices that have served Americans throughout the life of the Republic.

After the long-delayed final tally, the Washington establishment and their media spokespeople called for the incumbent president to concede and move on.

When President Donald Trump and his supporters tried to address the alleged abnormalities through the courts, judges refused to hear their case. Big media told Americans that Trump and his team have lost all the court cases linked to the 2020 election. But the cases were never heard.

Following a Jan. 6 Stop the Steal rally and a disruptive breach of the Capitol building by a rump of outraged protesters, a vindictive second impeachment effort was launched against the outgoing president.

Mirroring the sentiments of the progressive media, Fox News analyst Brit Hume concluded that Trump was now “radioactive” even among Republicans. Speaking on “Tucker Carlson Tonight,” Hume blamed the president and his allies for feeding his supporters “balderdash” about the possibility of voter fraud in the 2020 election.

From there on, anyone questioning the 2020 election was to be regarded as a conspiracy theorist or potential domestic terrorist.

Given the Biden administration’s disastrous immigration policy reversals, draconian executive orders, radical administration appointments, and partisan legislative initiatives over the past several weeks, many Republicans appear certain they will take back Congress in 2022 and the presidency in 2024.

Buoyed by the 2016 memory of an incredible political turnaround, conservative optimists are confident that ordinary Americans will reject the pernicious influence of big education, big government, big media, big entertainment, big tech, big finance, and big Beijing to vote, once again, for an “America First” agenda.

But will their votes count? House Democrats recently passed H.R. 1, the so-called “For the People Act” of 2021. If passed by the Senate, this act will transfer authority over elections to the federal government from the states.

In short, customary U.S. election practices are destined to become relics of the past. The secret ballot, cast in-person on a designated Election Day and scrutinized by bipartisan observers, is about to be relegated to the trash can of American history.

On the afternoon of Nov. 19, 1863, four-and-a-half months after the Battle of Gettysburg, President Abraham Lincoln delivered an iconic speech at the dedication of the Soldiers’ National Cemetery in Gettysburg, Pennsylvania.

The main purpose of the Gettysburg Address was to urge everyone to honor those who had died by striving to maintain the kind of nation imagined by America’s founders.

Lincoln’s words sought to honor those who had given their lives to ensure “that government of the people, by the people, for the people, shall not perish from the earth.” The president’s words could apply as well to the countless soldiers who have died for the cause of democracy throughout modern history.

Over the past 100 years, radical socialist movements have sought to remove “of and by the people” from the liberal democratic tradition. Socialists seek to govern “for the people” because they’re entirely convinced that people aren’t qualified to make decisions for themselves. As the current progressive genius in the White House might assume, the people behave like “Neanderthals.”

Authoritarian leaders love “democracy,” but only when it can be rigged in their favor. Pretenders to high positions can be extremely insecure, especially when they know their legitimacy isn’t truly derived from the consent of the governed. Hence, a shocked free world is witnessing a military occupation of Washington to protect so-called people’s representatives from the people themselves.

Having fortified America’s “People’s House” with chain-link fencing, razor wire, and thousands of National Guard troops, Democratic politicians are now moving to make permanent all the electoral abnormalities that assured Biden’s victory in 2020.

The “For the People Act” of 2021 effectively eliminates all the “of and by the people” principles of American democracy. It ends state-managed elections and leaves the doors open for rampant fraud and abuse. Among other controversial measures, it mandates early voting, universal mail-in balloting, and same-day, online voter registration. It disallows state voter ID laws and prohibits prosecution of illegal residents who report they were erroneously registered to vote.

Constitutional scholars say the bill will give legislative authority to all the illegal alterations made by progressive state officials in preparation for the 2020 election. All of these unusual measures were supposedly taken out of concern for public health and a desire to prevent “voter suppression.” The latter is the ludicrous, and perhaps even supremacist notion, that people of color are incapable of voting in the same manner as other Americans.

Whistling Past the Graveyard of Democracy

With all the levers of government in the hands of the most radical progressive regime in American history, and a majority of Supreme Court justices regarding credible charges of voter fraud to be “moot” once the alleged illegal votes have been counted, the well-being of the American Union is clearly uncertain.

Unless enough state governors, legislators, and informed citizens come to the nation’s rescue and restore the time-honored principle of government by the people, optimists about turning the vote around any time soon may simply be whistling past the graveyard of democracy.

William Brooks is a writer and educator based in Montreal. He currently serves as editor of ”The Civil Conversation” for Canada’s Civitas Society and is an Epoch Times contributor.